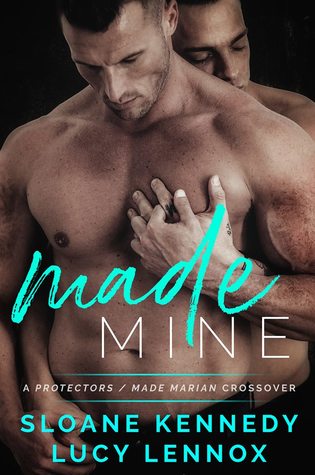 What happens when a group of tough vigilantes meets up with a big-hearted family with boundary issues?
Reese: It’s supposed to be an easy job. You know, the kind you get after you’ve been gone a while and the boss is unsure of how capable you still are? But then there’s a mugging, an abduction, two thugs, and a blackmail scheme.
And smack-dab in the middle of it is a beautiful lost soul who needs me. The scared, young gamer-geek pushes all my protective buttons and awakens something inside me that’s ready to dive right in and inhale the man.
But how could I have anything to offer someone like Ben? I’m a mess. Injured, scarred, practically closeted, the recognizable son of a famous man… There’s no way I can ask him to give me a shot at forever. Right?
Ben: It seems like I’ve been looking out for myself my entire life. Heck, I was even given away the day I was born. And, yeah, maybe if my adoptive parents had survived, I would have had a nice life. But they didn’t. And I don’t. Instead, I’m forced to put up with a hateful, scheming foster parent for the sake of sticking around to care for my little sister.
Only, when a blackmail plan lands little Georgie in the hands of thugs, it’s clear I’m her only hope. At least… until I meet the big, strong bodyguard someone sends to watch over me.
Reese is everything I’ve ever daydreamed about: protective, attentive, affectionate, and dedicated. But he’s hiding something, and I don’t have the time or energy to figure out what. Because time is running out, and Georgie is the only family I have left.
Until the biological brother who never wanted me shows up and turns everything on its head.
After having finally accepted it’s just Georgie and me, suddenly falling for my protector and being surrounded by Griff and the Marian clan makes me question everything I’ve ever known about myself and what defines a family.
Can a guy with a broken past ever build a family with someone who seems too good to be true?

Is is no secret that I am a HUGE fan of the “Protectors” series by Sloane Kennedy. Actually I am a big fan of anything Sloane has written. So when I found out there was gonne be a crossover, between Sloane Kennedy’s “Protectors” and Lucy’s Lennox’ “Made Marian”, my curiosity was peaked immediately.

Now, I am gonna be honest here, and confess that haven’t read all the books in the “Made Marian” series. I did read “Grounding Griffin” though, but for those of you who haven’t…no worries. I think this book can be read without reading that one (though why would you, because it’s a great story).

This book is about Reese and Ben. Reese was fist introduced as the son of Everett in “Unexpected” and to fully understand who he is and what he has been through…I really do advice everyone to read Everett’s book, before starting this one.

Reese has been back on the job (partially) and he has been instructed by his boss to keep an eye on Ben. Ben was admitted to ER after being roughed up and he has left the hospital against their advice. When Ben gets robbed right in front of Reese, Reese has no choice but to break cover and step in. What was supossed to be an easy surveillance job, turns into so much more when Ben’s little sister Georgie is in danger.

Now that’s all you are getting from me, because I don’t want to spoiler any of the good stuff. :P…I will say though, that for me this book was the perfect blend of “The Protectors” suspense and hurt/comfort, and the “Made Marian” fun and lightness. Ben especially had me laughing my ass off…I really fell in love with him. ❤

When I went into the story, I was afraid it was gonna be too insta-lovey for me…but then, even though there was extreme attraction from both parties…it turned into a bit of a slow burn…And boy did they burn when they finally got it on!!! I was also quite surprised with how naughty Reese could be. 😜 Damn!!!

All in all for me, the start of this cross-over was really great, and I can’t wait to see who and what’s next…Keep’em coming ladies!!! 😀