Check out this fantastic new release…
Read an Excerpt, and grab your copy today!
You don’t want to miss this book…
More details below!😀 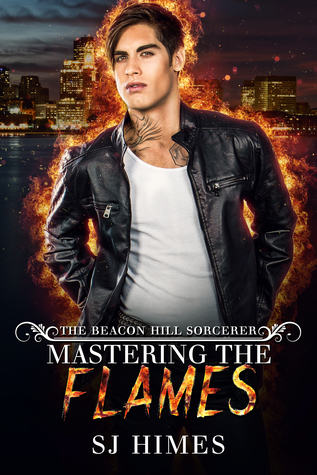 Guilt-ridden after the massacre of his family, Isaac Salvatore turned to binge drinking to escape the pain.

Now twenty-four years old, Isaac is a recovering alcoholic woefully out of practice in the magical arts, leaving his fire affinity hanging on the edge of disaster. After a month of rehab, he returns to Beacon Hill and his family, determined to remain sober, learn to control his magic, and figure out a plan for his life that doesn’t involve drinking.
Constantine Batiste is the oldest, most powerful vampire in the city. Born in ancient Gaul, the bastard son of a Celtic king, his long life has been shrouded in tragedy and horrors. Recent mistakes have left him wary and determined to guard his clan from all foes. When two of his clan members fall victim to an ancient evil, he summons the Necromancer of Boston for aid. Accompanying his older brother to the Tower is the handsome young fire mage once wounded by Constantine’s arrogance, and their encounter reignites an attraction that burns within both Constantine and Isaac.
The answer to who is targeting the vampires of Boston is buried in the dark, early days of Constantine’s transition to an immortal life. Isaac finds himself saddled with a painful insight into the evil cutting a swath through the supernatural population of Boston. While his brother, Angel, takes over the hunt to find and stop the threat to the city, Isaac struggles to find a balance between helping his brother and finding his own purpose and place in the world, free from his brother’s shadow.
Falling in love wasn’t part of his plan, but mastering the flames that burn between him and Constantine soon becomes the most important thing in his life, even as an ancient evil seeks to destroy them.
–Mastering the Flames is the fourth book in The Beacon Hill Sorcerer series and is not standalone. The series should be read in order for maximum enjoyment and understanding of the plot and characters.– 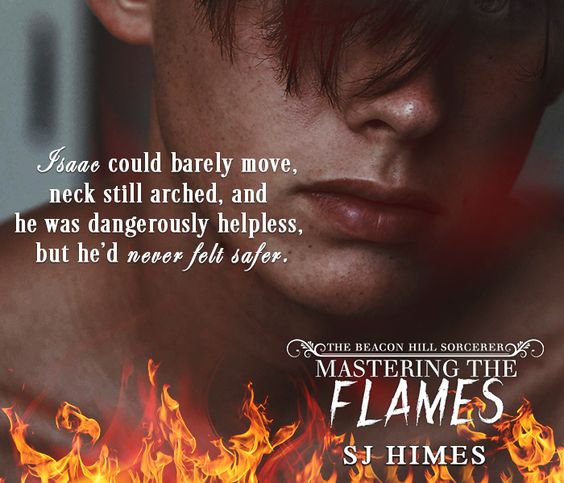 Read an Excerpt from Mastering the Flames
Copyright © 2019 by S.J. Himes. All rights reserved.
~*~

“Thank you for letting me stay here last night, and for giving up your bed.”

Constans only nodded again, then gestured elegantly to a door off to the side. “The bathroom is through there. Fresh towels and toiletries await, and while you slept, I had your clothing laundered. If you like, I can call for breakfast while you get cleaned up.”

“Um, yes. Thank you.” Isaac threw back the blankets and carefully got to his feet, happily surprised that he wasn’t feeling like he would fall over or stumble. Being sober still felt weird, even after more than a month of it. Waking up in someone else’s bed and not having a hangover from hell was a rather novel experience.

Constans gracefully exited the bedroom, and Isaac went to the bathroom, finding a white marble and dark wood bathroom that was spotless, elegant, and understated while still screaming luxury. The toilet and nearby bidet were marble as well, and he chuckled at the thought of someone carving marble toilets for a job as he relieved his bladder. Probably paid extremely well. The rainfall spout showerhead and the four pulsating jets in the stone tile shower stall were an indulgence he’d sell his soul for and he stood under the pounding spray for longer than he needed, soaking up the relaxation.

He eventually dragged himself out of the shower, brushed his teeth and hair, used the unscented toiletries, and headed out to get dressed. His clothes were clean, and the frayed seam on his jacket was so expertly repaired that he might have been hard pressed to remember it had been damaged during the argument with Angel the night before. Isaac pulled on his clothes, grabbed his stuff, and headed out of the bedroom, following his nose to a small dining table in another glass-walled room, this one with a view over the harbor.

The view was slightly diminished and as gray-toned as the rest of the vantages in the penthouse. Very different from the specialized sunlight wards Angel fashioned to keep Simeon safe at the Beacon Hill apartment. There the light was golden and bright, with only the barest hints of magic on the windows to prove the protections were in place at all. Here in the Tower, the glass was chemically treated with industrial strength ingredients that blocked the radiant magic and UV rays that burned vampires. Despite the windows, he could tell the sky was bright and clear, and the view was still something to admire.

Two bloodclan donors were arranging the table with food, giving him polite hellos when he came in, and he waved awkwardly, not used to having what amounted to servants doing anything for him. When he was a kid, they had staff in the Mansion, but they died in the Massacre, and when Angel moved the two of them to Beacon Hill, they were alone, and Angel never hired a cleaning service. It had taken some getting used to for sure, a spoiled rich kid learning to do everything for himself, but trauma was a great leveler of privilege. The servants left once he sat, and he ate alone, though he had a concrete suspicion that if he were to whisper Constans’ name the vampire would appear immediately. He wasn’t far—and that didn’t bother Isaac at all.

Bacon crisped to perfection, a sweet onion and sesame seed bagel and smoked salmon flakes with cream cheese was his breakfast, a side of chopped fresh fruit and yogurt to finish it off. Earl grey tea with honey and a tall glass of lemon ice water complimented it all, and Isaac devoured the entire lot of it in minutes, hungrier than he’d expected to be. But then despite eating supper at the Italian place, he did empty his stomach the night before. He pillaged the tiny mints in a glass bowl near his water, crunching on the sweets, and he sipped his water, content to just wait and see what happened next.

“Was it enjoyable?” Constans asked as he materialized in the room, coming out of nowhere like some special effect in a movie. Isaac set his water down with a sharp thwap and laughed, startled.

“Fuck! Seriously? You did that before, when Simeon was hurt, didn’t you?” Isaac got up and walked around the table, stopping a foot or so away from Constans and squinting at the undead man. “How did you do that? It wasn’t moving in a vampire blur—the air is displaced when Simeon moves super-fast—always a breeze. No wind this time.”

Constans shrugged a single shoulder, casual and a bit teasing. “I am old. It comes with perks. How was your breakfast?”

Constans didn’t even look abashed or ashamed—he shrugged again, and Isaac poked one rock-solid pec with his finger. “Are you stalking me?”

Isaac snorted. “I have no idea why I’m not mad.”

Constans leaned forward a bit, and Isaac turned slightly so he could whisper lightly in his ear. “I think you like it, mon coeur.”

“Maybe. I’m also not the most stable of people, so there’s that.” Isaac turned so he could look in Constans’ bright blue eyes. “Or maybe I know it’s because you care about Simeon, and so you had us all investigated when Angel and Simeon hooked up.”

Lush pink lips twitched, and a beautiful smile broke free, made all the better by the fangs on display before Constans chuckled. A cold finger brushed along his cheek and Isaac’s skin tingled, and his breath caught in his throat. “Sharp as a dagger, mon coeur.”

“You shouldn’t call me that,” Isaac said softly, turning into the caress that slipped from his cheek down his neck. It didn’t bother him at all that Constans could snap his spine with a flick of his fingers or drain him in seconds. Once upon a time, not too long ago, he would never have been so calm near a vampire, despite frequenting their bars for the last few years. Maybe alcohol-induced paranoia was something he should consider. “I’m not your heart.”

“You know French, mon petit feu?” His hand, cold at first but warming with every second in contact with Isaac’s body, slipped around to the nape of Isaac’s neck and pulled him gently forward. Isaac breathed through parted lips, eyes locked on Constans’ mouth. He wanted a taste.

“I do, not a lot, but enough to manage. I’m not a ‘little’ anything, either,” he whispered. He couldn’t stop the grin at Constans’ low growl in response, a sexy rumble that lit a fire low in his belly. “Kiss me.”

His mouth was claimed before his finished the words, and he pushed into it, arms around Constans’ neck while firm hands on his ass. He groaned, tilting his head, and kissed back with everything he had. Constans gripped his buttocks hard and Isaac was lifted to sit on the table, legs spread, Constans between them. He ran his hands through soft, silky strands of thick blond hair and gripped tight, swallowing the sharp growl from the predator devouring his mouth. 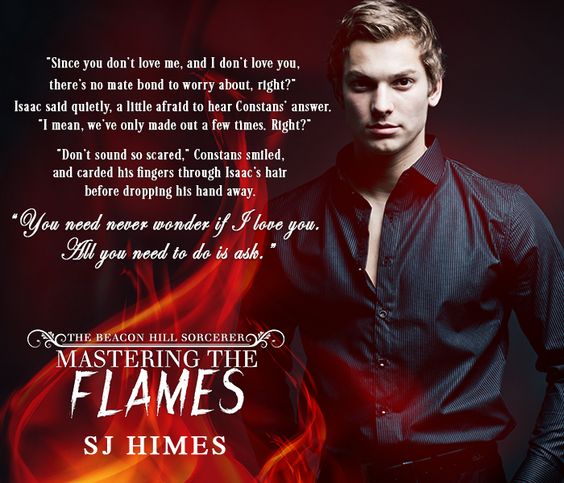 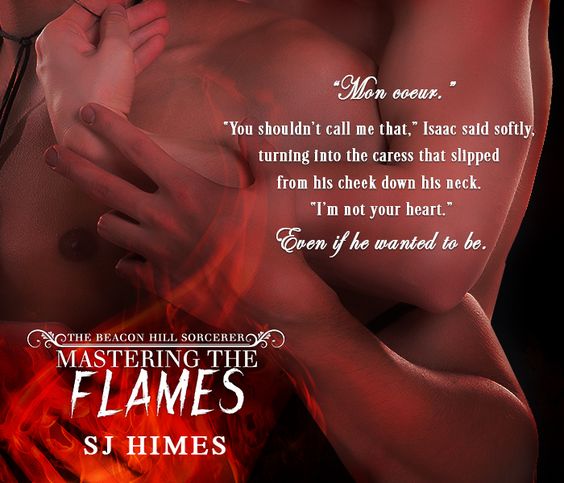 My name is Sheena, and I have more pen names than I probably should. I write as SJ Himes, Revella Hawthorne, and Sheena Himes. I reside in the mountains of Maine (closer to Canada than I am to fresh lobster) on a 300-year-old farm beside a river in the woods. My companions are my furbabies: Micah, my large dog who hates birds; and Wolf and Silfur, two cats who love me but hate each other. I write romances with an emphasis on plot and character development, and almost all my characters are LGBTQ+ and that’s on purpose. To keep current on what I’m working on and where to find me on social media, go to my website: http://www.sjhimes.com