Check out this fantastic new release…
Read an Excerpt…and grab your copy today!
Don’t forget to enter the Giveaway!😀
You don’t want to miss this book…Details below! 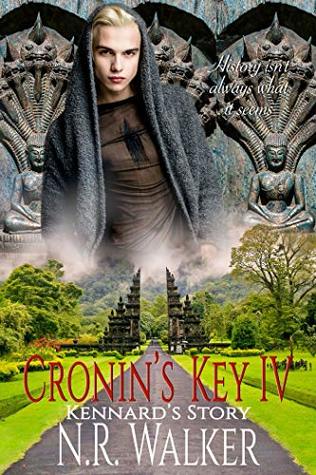 Kennard and Stas have been enjoying being newly bonded mates, hidden away for the last six months in Stas’ cabin, deep in the forests of Northern Russia. When they get a visit from Alec, Cronin, Eiji, and Jodis, Kennard and Stas decide to return to London where they get news of a supernatural disturbance in India.
Excited for a new adventure, the band of friends embark on a journey like they’ve never seen before. Following a trail of snakes and serpents, they slip through gates into timeless dimensions all over the world, leaving them without their vampire powers. Even Alec is powerless as they follow a trail of gates and doorways to their final destination.
But the bad guy isn’t who they think it is, and Kennard will need to draw on his past to save their future. Because history is never what it seems

Read an Excerpt from Kennard’s Story
Copyright © 2019 by N.R. Walker. All rights reserved.
~*~

“Do you think we should try and get out of bed today?” Kennard asked.

“No.” Stas’ voice was gruff, warm and delicious in his ear.

Kennard smiled into the mattress and tried to pull himself toward his pillow, a feigned escape attempt, but Stas’ huge hand gripped his hip and slid him back into place. Then Stas rolled on top of him, his erection pressing against Kennard’s ass. Kennard lifted his hips and spread his legs, giving Stas all the permission he needed as he laughed into the sheet. “It’s been six months. I guess one more day won’t hurt.”

Stas pushed inside him and both men groaned. “We never leave,” Stas whispered, his fangs at Kennard’s shoulder. “Stay here forever.”

Kennard had always doubted the mating bond between vampires. Well, not doubted. He’d never understood it. He’d spent most of his six hundred years alone. He’d had acquaintances and friends and a lot of lovers. Yet his heart had never been moved by anyone. He almost thought it had frozen in his chest when he was changed from human to vampire, because the way he’d seen mated pairs behave was so foreign to him.

But then there was Stas.

As soon as he’d seen him, he knew. The melancholy that had settled over him in the months before, like a mist, had dissolved the moment his eyes fell upon him. His purpose was now clear. This huge, hulking Russian vampire was his.

They’d been holed up in Stas’ cabin in Lithuania at first, barely leaving each other’s embrace for a minute. Then they’d driven Stas’ truck to one of his cabins in some far-off Russian forest and hadn’t left each other’s side, or their bed. Except to feed, which hadn’t been anywhere near as often as it probably should’ve been, because they seemed to feed off each other. Energy, blood, love. Sex. So much sex, yet nowhere near enough. They’d barely stopped long enough for important conversations. Stas had managed to give some of his history, Kennard even less so.

The desire, the bone-deep need to be with Stas, to have him inside him, to be one with him was so profound it was dizzying. Kennard used to roll his eyes at newly fated mates. They used to make him sick. Now he wanted nothing more.

“You are everything,” Stas whispered. He ran his hand through Kennard’s hair, messing it up even further, kissing his head. “My everything.”

Kennard rolled his hips and pressed his forehead into the mattress, arching his back. “I ty moy,” Kennard murmured.

And you are mine.

Stas always reacted when Kennard spoke Russian. Especially in bed. He growled into the back of Kennard’s neck and sunk his fangs into Kennard’s shoulder while he thrust deeper inside him, and Kennard’s whole body sang.

Every cell, every fiber of his being.

And afterwards, when Stas had wrung Kennard of every ounce of pleasure, they lay in bed in each other’s arms.

“I might even try turning on that old radio set today,” Kennard said. “If the batteries work.”

Kennard laughed into his chest, Stas’ chest hair tickling his face, but lovely and soft and warm. “I’ve lost all track of days.”

“I think is March,” Stas said with a chuckle.

Kennard found his broken English adorable, and he hummed happily. “Sounds about right.”

Stas ran his wide hands over Kennard’s slender form, over his pointed hip, up his spine. He was literally twice Kennard’s size. Stas had a masculine build, short, dark-brown hair, blue eyes, and a square jaw. Broad shoulders, huge hands. Everything about him screamed man. Whereas Kennard was fine-featured with pretty, boyish looks and white-blond hair. Stas was a loner, his home in the Russian wilds, in a basic cabin with no electricity or running water, and Kennard was a social guy who lived in an expensive apartment with every conceivable technology and thrived in the London nightlife. Opposites in every way, yet one perfectly complemented the other. “Do you wish to feed?” Stas asked.

Kennard considered it and took stock of his body, his baser need to feed. “No,” he said simply. “I don’t need anything but you right now. What about you?”

But Stas didn’t answer. He cocked his head and he frowned. “Hear that?”

It took Kennard a second to shake his mind of his post-coital haze, but then, yes, he could. “Someone is coming? In this weather?” It was snowing. The entire forest was under a blanket of white.

Stas sat up on the bed and pulled on some jeans. “Is human.”

“Can you read their mind? Do you know who they are?”

Stas’ cabin was isolated, deep in some Northern Russian forest. It was old, built a few hundred years ago. A simple A-frame log cabin with a bedroom loft on the mezzanine and a small living room on the ground floor, an unused kitchen, and an old-fashioned bathtub they needed to heat water for. It was positively prehistoric compared to Kennard’s apartment in London, but it was all Stas had ever needed. He’d relished in the isolation, a reprieve from his vampiric ability to hear the minds of those around him.

The driveway to the cabin was long and overgrown; the cabin couldn’t be seen from the road, especially in winter. And most human drivers who passed by—of which there were few—didn’t know it was a driveway at all.

Stas had told Kennard he knew humans ignored his driveway because Stas could hear their thoughts. Except he hadn’t heard a thing since Alec had blocked Stas’ mind when they were in the pits under Moscow and…

“Have you heard anything since Moscow and Pennsylvania?” Kennard asked.

Stas seemed confused. “I don’t know. I think no. The campers at lake we found were sleeping, and I focus on you so much, I not notice.”

That was true. They’d only fed once, when some foolish hunters camped out by the lake and drank far too much homemade vodka. It was the first time he and Stas had fed together, and well… it had been a feed and fuck fest. Kennard wasn’t surprised Stas was so distracted. The memory made him flush. “Well,” Kennard said, slipping on a robe. It belonged to Stas, and it swam on Kennard—it was far from his usual stylish garb—but he didn’t care. “Let’s deal with this human first. See if you can hear anything when you speak to him.”

Kennard wasn’t sure of the science behind mind reading or how any vampire talent worked, for that matter, but he gave Stas a smile he hoped was a comfort.

A black van came into view, driving slowly, clearly very unsure or lost. It was getting dark and the van’s headlights cast a yellow light across the snow. It pulled to a stop, and after a moment, a man exited the vehicle. He slid back the side door and pulled out a large bouquet of flowers. Not just any flowers, but white stargazer lilies.

Kennard burst out laughing, dashed down the stairs, and opened the door. The porch cover was deep enough so no sunlight could reach the front door—not that Northern Russia saw much sunshine—and the delivery man smiled at first. Then upon closer inspection, as though realizing Kennard wasn’t exactly human, or perhaps he felt the danger, that cold shiver of fear from being so close to evil, the man’s smile disappeared and he stumbled closer to the door. He mumbled something in Russian that Kennard couldn’t quite work out—huge payment, middle of nowhere?—but he handed over the large bouquet and staggered back, waving as he climbed into his van before he sped back down the driveway.

Kennard spun inside, twirling like a dancer, and laughed as he held out the flowers. “Well, at least we know what day it is.”

Stas was clearly confused. “What?”

“What is the significance of this date to you?” Stas asked. “And who sent you flowers? Who even knows where we are?”

Kennard flitted over to his big protective lump of a mate, leaned up on his toes, and kissed him. “March twenty-fourth is a dark, dark day in England’s history. A day of mourning, really.”

Stas was immediately concerned and angry, even. “What is it? What happened to hurt you like this? I will find them!”

Kennard chuckled. “Nothing like that, my love. Cronin sends me flowers on March twenty-fourth, every year, to commemorate the union of the crowns.” Kennard frowned and sighed loudly. “A dark, dark day indeed.”

Stas cupped Kennard’s face. “What is this union of crowns? I not understand.”

Kennard shook his head sadly. “It was when a damn Scot became King of England.”

N.R. Walker is an Australian author, who loves her genre of gay romance. She loves writing and spends far too much time doing it, but wouldn’t have it any other way. She is many things: a mother, a wife, a sister, a writer. She has pretty, pretty boys who live in her head, who don’t let her sleep at night unless she gives them life with words. She likes it when they do dirty, dirty things… but likes it even more when they fall in love. She used to think having people in her head talking to her was weird, until one day she happened across other writers who told her it was normal. She’s been writing ever since…