Check out this fantastic new release…
Read an Excerpt, Wendy’s Review…and grab your copy today!
You don’t want to miss this book! 😀 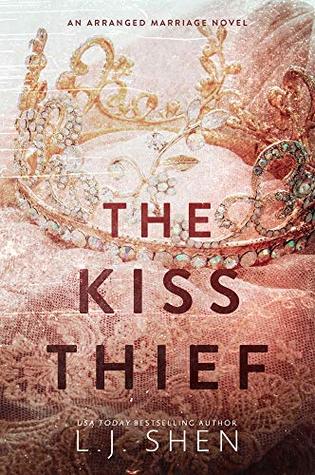 They say your first kiss should be earned.
Mine was stolen by a devil in a masquerade mask under the black Chicago sky.
They say the vows you take on your wedding day are sacred.
Mine were broken before we left church.
They say your heart only beats for one man.
Mine split and bled for two rivals who fought for it until the bitter end.
I was promised to Angelo Bandini, the heir to one of the most powerful families in the Chicago Outfit.
Then taken by Senator Wolfe Keaton, who held my father’s sins over his head to force me into marriage.
They say that all great love stories have a happy ending.
I, Francesca Rossi, found myself erasing and rewriting mine until the very last chapter.
One kiss. Two men. Three lives. Entwined together.
And somewhere between these two men, I had to find my forever. 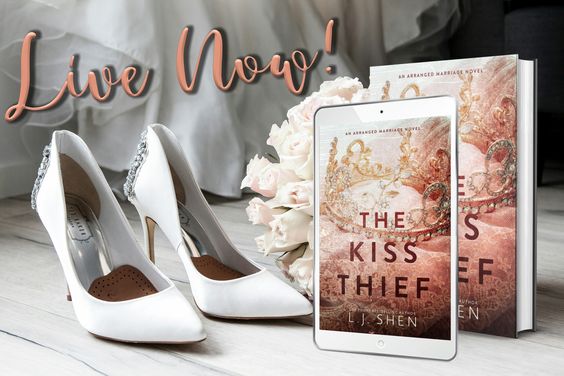 I must confess that I haven’t read a lot of “love triangles” and there is a reason for that. They make me extremely nervous. I like angst in my books but the angst that comes with “love triangles” can actually drive a person to drink. Which is why I am normally not a fan of this trope. You know who I am a fan of though… L.J. Shen!! So, me reading this book was a pretty much a done deal. 😉

Writing a review is a bit of a challenge though because I really don’t want to spoiler this story. I think it would best to jump into this one blind…

I am a huge fan of L.J. Shen’s Sinners of Saint series. I loved all the HotHoles, which should tell you, how much I love a redeemable asshole !! Well, if you are anything like me…you are gonna love the hell out of this one…and out of Wolfe. 😉

Wolfe Keaton was a kiss thief.

The heroine in this story, Francesca, she was a bit different than what I am used to…by this author… but also just in general. She was sweet, a bit naive, and shy…but she wasn’t weak by any means. She was strong in her way. And even though I would have done things very differently than her…I still admired her. She wasn’t exactly what I expected from a mafia princess. There were still times I wanted to shake her a bit though…

A Story of a Nemesis and a Villain with no chance at a happy ending.

This book definitely managed to make me “feel the feelz“. Anxious, excited, angry, sad, happy are just some of the emotions I went through while reading, and I finished it in one go… No social interactions on this new years day for this girl 😛 I started the year exactly how I wanted to…with an awesome book !!

“Maybe I am the monster. After all, I come out to play at night. But so do you, little one. You’re in the darkness too.”

This one has unquestionably deserved a spot in my favorites list, though it hasn’t surpassed “Ruckus” and “Bane” for me.  That might never happen because I fell in love with those boys/men hard. Doesn’t mean I didn’t fall for Wolfe as well 😉

I highly recommend this book as well as any other one written by this author!

Excerpt from The Kiss Thief
Copyright © 2019 by L.J. Shen. All rights reserved.
~*~
“Are you sure you’re on my card?” I turned to the man with a polite yet distant smile. I was still disoriented from the exchange with Angelo when the stranger pulled me against his hard body and pressed a possessive hand lower than socially acceptable on my back, a second from groping my butt.

“My bid on your card was the highest,” he replied dryly.

“The bids are undisclosed. You don’t know how much other people have paid,” I kept my lips pursed to keep myself from yelling.

“I know it’s nowhere near the realm of what this dance is worth.”

We began to waltz around the room as other couples were not only spinning and mingling but also stealing envious glances at us. Naked, raw ogles that told me that whomever the blonde he’d come to the masquerade with was, she wasn’t his wife. And that I might have been all the rage in The Outfit, but the rude man was in high demand, too.

I was stiff and cold in his arms, but he didn’t seem to notice—or mind. He knew how to waltz better than most men, but he was technical, and lacked warmth and Angelo’s playfulness.

“Nemesis.” He took me by surprise, his rapacious gaze stripping me bare. “Distributing glee and dealing misery. Seems at odds with the submissive girl who entertained Bishop and his horsey wife at the table.”

I choked on my own saliva. Did he just call the governor’s wife horsey? And me submissive? I looked away, ignoring the addictive scent of his cologne, and the way his marble body felt against mine.

“Nemesis is my spirit animal. She was the one to lure Narcissus to a pool where he saw his own reflection and died of vanity. Pride is a terrible illness.” I flashed him a taunting smirk.

“Some of us could use catching it.” He bared his straight white teeth.

“Arrogance is a disease. Compassion is the cure. Most gods didn’t like Nemesis, but that’s because she had a backbone.”

“Do you?” He arched a dark eyebrow.

“Do I…?” I blinked, the courteous grin on my face crumpling. He was even ruder when we were alone.

“Have a backbone,” he provided. He stared at me so boldly and intimately, it felt like he breathed fire into my soul. I wanted to step out of his touch and jump into a pool full of ice.

“Of course, I do,” I responded, my spine stiffening. “What’s with the manners? Were you raised by wild coyotes?”

“Give me an example,” he said, ignoring my quip. I was beginning to draw away from him, but he jerked me back into his arms. The glitzy ballroom distorted into a backdrop, and even though I was starting to notice that the man behind the demi-mask was unusually beautiful, the ugliness of his behavior was the only thing that stood out.

I am a warrior and a lady…and a sane person who can deal with this horrid man.

“I really like Angelo Bandini.” I dropped my voice, slicing my gaze from his eyes and toward the table where Angelo’s family had been seated. My father was sitting a few seats away, staring at us coldly, surrounded by Made Men who chatted away.

“And see, in my family, we have a tradition dating back ten generations. Prior to her wedding, a Rossi bride is to open a wooden chest—carved and made by a witch who lived in my ancestors’ Italian village—and read three notes written to her by the last Rossi girl to marry. It’s kind of a good luck charm mixed with a talisman and a bit of fortunetelling. I stole the chest tonight and opened one of the notes, all so I could rush fate. It said that tonight I was going to be kissed by the love of my life, and well…” I drew my lower lip into my mouth and sucked it, peering under my eyelashes at Angelo’s empty seat. The man stared at me stoically, as though I was a foreign film he couldn’t understand. “I’m going to kiss him tonight.”

A conceited frown crinkled his mask, as if to say I was a complete and utter moron. I looked him straight in the eye. My father taught me that the best way to deal with men like him was to confront, not run. Because, this man? He’d chase.~*~ 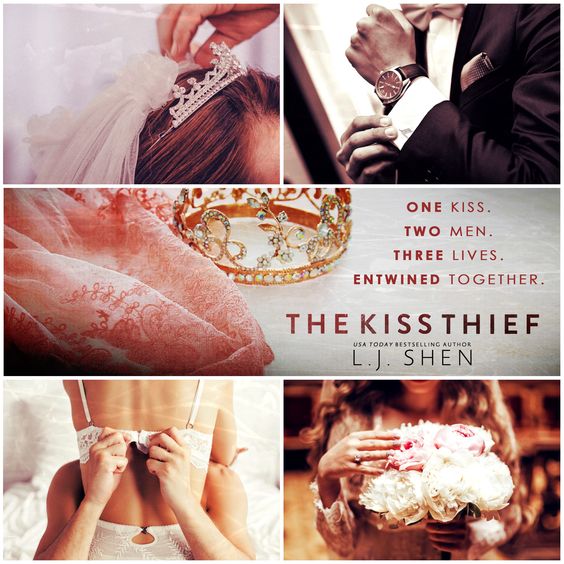 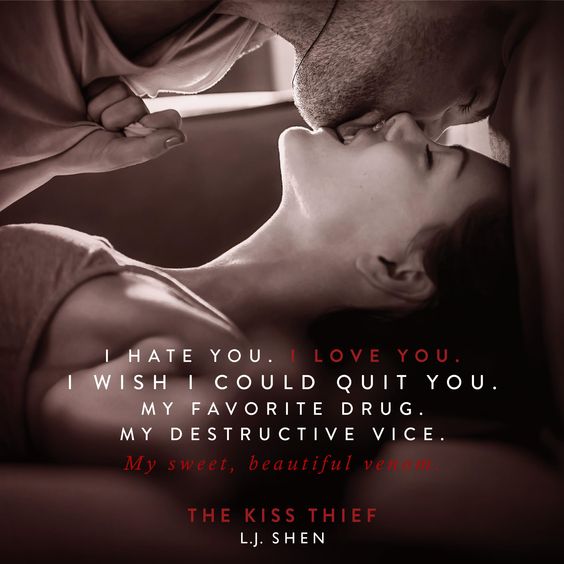 L.J. Shen is an International #1 best-selling author of Contemporary Romance and New Adult novels. She lives in Northern California with her husband, young son and chubby cat. Before she’d settled down, L.J. (who thinks referring to herself in the third person is really silly, by the way) traveled the world, and collected friends from all across the globe. Friends who’d be happy to report that she is a rubbish companion always forgets people’s’ birthdays and never sends Christmas cards. She enjoys the simple things in life, like spending time with her family and friends, reading, HBO, Netflix and internet-stalking Stephen James. She reads between three to five books a week and firmly believes Crocs shoes and mullets should be outlawed.