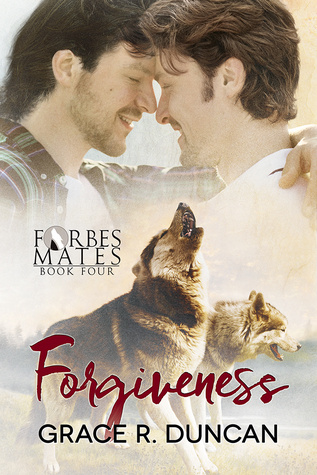 Ben’s love can help Eric find the forgiveness he needs… if Eric can accept it.
Nine years ago Eric Joyce went wolf when his chosen mate broke the bond, and he hasn’t walked on two legs since. Convinced he lost his friends when he ran out on them, he cut himself off from the pack. But a surprising visitor prods him back down the mountain, and he finds himself welcomed warmly.
Ben Arellano grew up in Texas with a human Catholic mother who didn’t understand a thing about wolves—and didn’t try to learn. He spent his whole life being told his wolf was a demon that needed to be exorcised, surrounded by a wolf pack made up of good ole boys who had no tolerance for his Mexican ancestry or his bisexuality. When he’s given the opportunity to relocate to an accepting pack in Pittsburgh, he jumps at the chance.
When Eric and Ben meet for the first time, neither is ready for it. Where Ben expects rejection, Eric is convinced yet another mate will leave, break the bond, and put him through the same hell all over again. Can they get past their reservations and have a happily mated life?

I really enjoyed the previous book in the “Forbes Mates” series, so I was very curious about Eric’s story since he was a big reason for Tanner’s behavior in book 1…9 Years ago, Eric’s chosen mate broke their bond, leaving Eric to retreat into his wolf-form and run.

He has been gone all this time, nurturing his broken, when unexpected help turns up and leads him back to the right path… Back to his old pack, where he is warmly welcomed back.

Ben is the son of a wolf shifter father and a human mother. To say his mother had a few screws lose it putting it mildly. She raised Ben to believe his wolf was a demon, which left him really insecure about his wolf form.

I was just as excited as he was when he left to join the Forbes pack, as their new accountant.

Now before I go any further, you should know that there is a difference between a “chosen” mate and a “destined” mate. Actually, the words say it all.

A “chosen” mate is one you choose and claim for and by yourself. A “destined” mate is someone, who Destiny has chosen for you…a perfect pairing. When a wolf gets close to his destined mate…he will know…there is no doubt about it!…So I guess you know where I am going with my story…

When Ben arrives at the Forbes Pack, it becomes clear real soon, that Ben and Eric are “destined mates”. Both of them are “carefully” happy about this fact. But Eric is still dealing with the wound, his “chosen” mate has left him with, so he is cautious in claiming Ben…He wants some more time to heal before he is ready. Ben is very understanding. In fact, he was way more understanding than I was.

I thought it took him way too long to come to his senses. I mean, he already spends 9 years in his wolf form, trying to get over the hurt. That should have been enough I think, but hey…I have never been dumped by my “chosen” mate so…I could be wrong!!

It’s just that, I understand him being wary of being hurt again, but this was his “destined” mate, who didn’t have the easiest of lives either…

This is definitely a “slow burn” romance and even though I really enjoyed reading it, it’s not my favorite in the series. That honor still goes to “Patience”, the second book in this series.

Recommended to those who love M/M Shifter stories! 😉