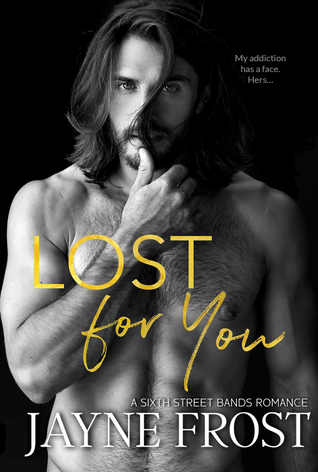 When I was eighteen, I stood at the precipice of stardom. I had the record deal. And the tour to back it up. But I succumbed to the pressure of that life. The dark side.
Now, I skate on the fringe. My brother is the genius guitarist for the band Caged, and I’m the one who helped make that happen. I’m happy to run my bars and my land development company.
Sure I am.
And then I meet her—Taryn Ayers—the music manager behind the three biggest bands in the country. She doesn’t know I’m Cam’s older brother. Or that I’ve got a secret that makes her world and mine fundamentally incompatible.
Problem is, I want to know Taryn.
But do I want her to know me?
Lost For You is a STAND ALONE New Adult Romance with recurring characters. Pick up books 1-3 to get the full experience! Intended for mature audiences due to hot as sin rockstars and the world they live in.
Please note: This book contains instances of drug use.

I was asked if I wanted to review an ARC for this one…It’s a rockstar romance…so dumb question really :P… It’s one of my favorite genres!

Now, I have never read anything by this author before…so this book can be read as a standalone…though, I think it would be more enjoyable if you read the other books in this series first. I could follow along, but there were also sometimes I struggled a bit.

Taryn and Tori are both quite the broken characters…They have been through hell and back and they did not come out unscathed. They also have their own ways of dealing with their past…These two meet and they share an instant connection. Pretty soon they can’t deny the chemistry between them anymore and they start getting lost in each other.

If you are looking for rainbows and flowers, you should skip this one. It’s raw, emotional and angsty…. and it really frustrated the crap out of me at times.

I also loved Chase more than I did Taryn…though this is not surprising to me because it takes a very special heroine to win my heart over. I just wasn’t a big fan of the whole Taryn and Beckett deal.