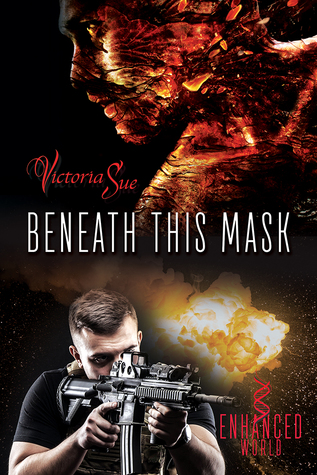 Gael Peterson has spent years hiding behind the enhanced abilities he wears like a mask, even though he is an important, confident member of the FBI’s exclusive H.E.R.O. team. The hurt and betrayal of his mom’s abandonment and his father’s fists are secrets buried deep beneath the ugly scars on his face, and he doesn’t trust Jake, his new regular human partner, with any of them. In a world where those with special abilities like Gael’s are regarded as freaks and monsters, it won’t be easy for him to rely on Jake to have his back, especially when the abilities of a vulnerable, enhanced, nonspeaking child make that child a murder suspect.
Tempers rise and loyalties are challenged, and when the serial killer targeting the enhanced finally sets his sights on Gael, not only will Gael have to trust Jake with his secrets, he might have to trust him to save his life.

After reading the first two books in this series, “Five Minutes Longer” and “Who We Truly Are”, which I both loved, I couldn’t wait to get my hands on this one!!!

Now before I go further with my review, I would like to advise all to read books 1 and 2 first. Even though this book is about a different couple, it’s not a standalone and these books have a continuing storyline! No worries though…like I said, the first two books are pretty awesome. 😉

Those of you, who have read the previous books, already know who Gael is, and if you are anything like me, you are probably chomping at the bit to read his story.

Gael is one of the members, of the FBI’s exclusive H.E.R.O. team, and also Talon’s closest friend. His abilities are making his skin impenetrable and speaking/communicating in any kind of language…and I do mean any kind. On the outside Gael seems to be very much in control of himself and his emotions, but the inside shows a much different story. There is a world of pain hidden underneath his scars…both physical and mental.

All this means that Gael doesn’t trust very easily. So it’s no surprise, that being partnered with Jake, makes Gael freak out a bit. He doesn’t want a partner, what’s the point if he will never trust him anyways…

Jake is the new “human” member of the H.E.R.O. team. He used to be in the ENu, but he’s very excited about his new job and partnership. Too bad his new partner doesn’t feel the same way. No matter how hard Jake tries…Gael just won’t give him a shot.

But maybe Jake is just going about it the wrong way…maybe he needs to take a different approach. 😛

I really enjoyed this one and the background story about the little boy was very intriguing and sweet at the same time.

Gael and Jake were pretty awesome together…and HOT…let’s not forget HOT, but Talon and Finn are still my favorite. This might change with the next book though. I am very curious about both Elis and Vance’s story…I do admit to already having a little crush on Vance’s new partner…It was love at first sight…(sigh)

I’m a huge fan of this series. It has hot men with superpowers, action, love, and some nice steam…what more does a girl need. 😛