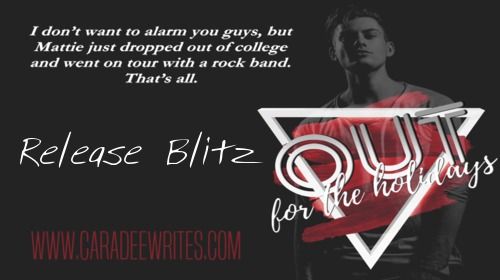 Check out this fantastic new release, read the Excerpt and Judith’s Review
and grab your copy today! 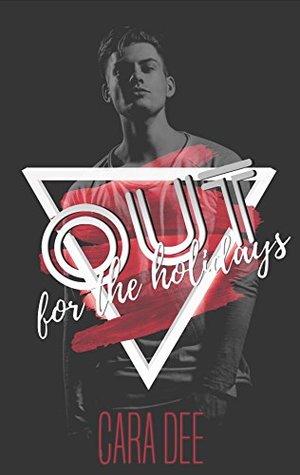 I’m not saying Henry jinxed us when he chose to send out two hundred holiday cards stating we were going to have a blissful Christmas at home…
Before we knew it, our peace and quiet went out the window, and we were headed to Mexico for a photo shoot my agent had neglected to tell me about. Of course, we had to deal with the man who didn’t want us to be together, and then we ended up back in LA, and we had to figure out what was going on with my brother, and, and… Okay, deep breaths. FYI, Philadelphia is nowhere near our home in northern Washington. Additionally, I wonder how Viagra really works, and what’s it gonna take to get a proposal around here?
Honestly. I’m not saying Henry jinxed us, but I’m writing the damn card next year.
Warning: This story contains more sugar than the cookies you leave for Santa, and it’s chock-full of greetings and updates from other characters written by Cara, titles including Noah, Home, Path of Destruction, Uncomplicated Choices, and more.
(A 40k words long Christmas-themed sequel to Out. Not a standalone.)

Henry and Zach are back! If you haven’t read Out, consider this your spoiler alert to the below. You can read where they started here: 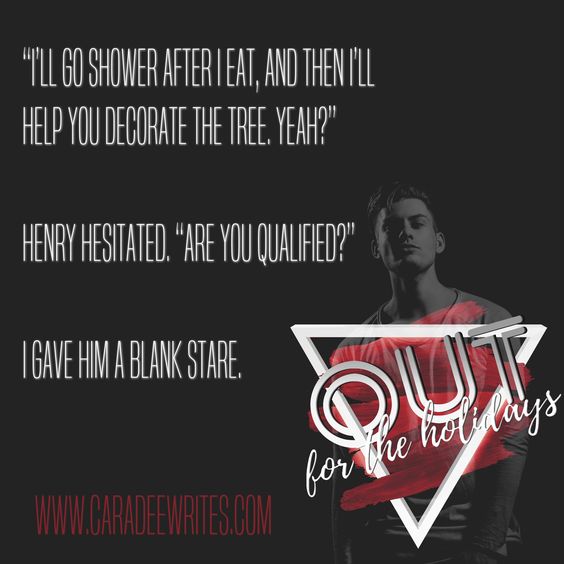 “Excuse me for a moment.” Henry wiped his mouth with a napkin before leaning close to me. “I’ve had it with Joseph’s stares. I’ll be right back.”

Wait, so they were gonna talk alone? Without me?

Henry was already gone, leaving me to wrestle irrational jealousy. It wasn’t fair to Henry, whom I trusted with all my heart. Joseph, however? I wouldn’t put it past him to try something. He’d certainly tried with me.

Noah had his eyes on the dancing pairs. “What do you say, sweetheart…?”

Julian pursed his lips and shook his head. “Have you forgotten our wedding? I literally bruised your toe.”

I drained my glass. Henry was taking Joseph aside, and clenched my jaw when they disappeared from sight around the villa. Needing a distraction, I turned to Noah.

“I’ll dance with you,” I said. “I’ll give it one song before Julian’s all over you.”

Julian gaped at me. “You’re supposed to be my friend, Zach.”

I puckered my lips at him.

He rounded the long table and met up with me at my side, and I followed him out on the floor as an upbeat song started playing. We didn’t have live music out here; instead, we had a mix CD, and I recognized this one. A Santana collaboration with the dude from Matchbox Twenty.

I placed my hand in Noah’s extended one, and he took me by surprise when he spun me around before hauling me close. “Holy shit,” I blurted out in a choked laugh. “Okay, I guess you know what you’re doing.”

Noah grinned. “My sister taught me when I was little.”

“Good to know.” Yeah, Julian didn’t stand a chance once he interrupted, and I knew he would. “Lead away, prince charming.”

And fuck me if he didn’t. The rock song brought more people to the floor, and soon most of us where having a workout. Noah made it fun with unexpected dips and twirls, and it’d been a while since I laughed so hard.

“We should just form a circle around you,” Akira hollered over the music. “Goddamn, Noah.”

Sweat beaded on my forehead, and I got into it. I had to hand it to Julian; he was more stubborn than I gave him credit for. A second song started, then a third and a fourth. Traditional salsa music mixed with rock and pop, and I followed best I could.

When I glanced at Julian, I could tell he’d reached his breaking point. He sat impatiently and stewed to himself. One final nudge would get him here, where he belonged.

The song morphed into a new one, another Santana collab. I recognized the Nickelback singer. The beat revved up, heavy and hot, and went on about dancing into the night.

“Ramp it up,” I said, breathing heavily. “You’ll get some possessive sex after this.”

“Oh, I intend to.” If he replied to my first or second statement, I wasn’t sure. “So will you. Move with me when I pull you back.”

“Okay.” I sucked in a breath and looked around, finally catching sight of Henry looking like he’d just returned with Joseph. And as I watched him gesture toward me and say things in Henry’s ear, I recognized Joseph for the snake he was. This went beyond flirting and trying to get into our pants.

“Ready?” Noah raised a brow, and I focused on the music. I let it drown me for the moment. I nodded. “Make it hot, kid.”

I smirked, and he yanked me to his chest. His hands on my hips, one of my hands at the back of his neck, and we moved damn well. He led me almost as perfectly as Henry did, our hips moving and speaking of sexual tension that wasn’t there.

I could. He was moving in the corner of my eye. “On his way.”

He nodded once and eased up. “Next time I wanna get him out on the floor, you’ll be my partner in crime.”

“Count me in.” That was about what I had time to say before Julian tapped me on the shoulder.

“May I cut in?” he asked with a tight smile.

He was too fucking sweet. I released Noah, and wanting to ease the tension from Julian, I gave his cheek a smacking kiss. “All yours, hon.”

The look in his eyes softened slightly, though it had nothing on when he was in Noah’s arms. I smiled as they forgot everyone around them, and then I made my way out of the little crowd and aimed for Henry.

Seeing the brief flash of worry in his eyes fueled my anger toward Joseph. Who fucking knew what he’d been saying to Henry. 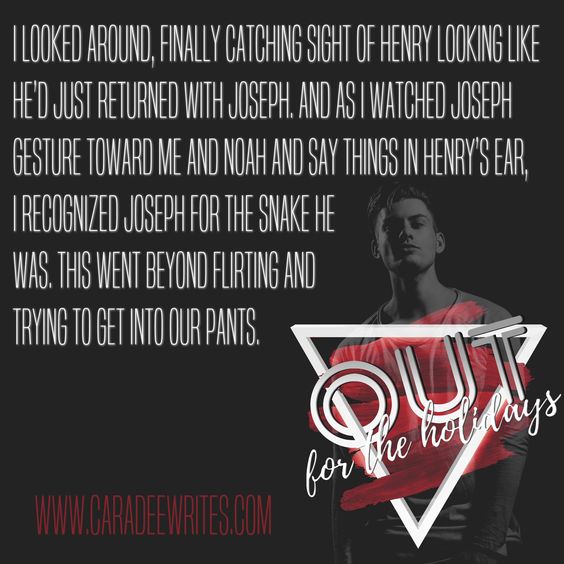 I’m often stoically silent or, if the topic interests me, a chronic rambler. In other words, I can discuss writing forever and ever. Fiction, in particular. The love story—while a huge draw and constantly present—is secondary for me, because there’s so much more to writing romance fiction than just making two (or more) people fall in love and have hot sex. There’s a world to build, characters to develop, interests to create, and a topic or two to research thoroughly. Every book is a challenge for me, an opportunity to learn something new, and a puzzle to piece together. I want my characters to come to life, and the only way I know to do that is to give them substance—passions, history, goals, quirks, and strong opinions—and to let them evolve. Additionally, I want my men and women to be relatable. That means allowing room for everyday problems and, for lack of a better word, flaws. My characters will never be perfect. Wait…this was supposed to be about me, not my writing. I’m a writey person who loves to write. Always wanderlusting, twitterpating, kinking, and geeking. There’s time for hockey and cupcakes, too. But mostly, I just love to write.