Check out this fantastic new release, read the Excerpt and grab your copy today!
Don’t forget to enter the giveaway! 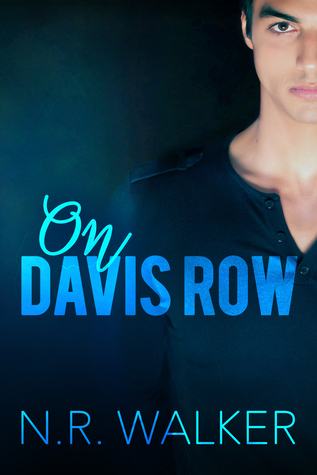 Nearing the end of a suspended jail sentence should unlock a brighter future for CJ Davis, only the chip on his shoulder is as hard to shift as his bad reputation. Born into a family of career criminals who live down Davis Road, an address the cops have dubbed Davis Row, his name alone is like a rap sheet that makes optimism impossible.
Brand-new parole officer Noah Huxley is determined to see the good in men like CJ. After all, he knows firsthand that bad things can happen to good people. His colleagues mock his doe-eyed optimism, but Noah soon sees CJ’s bad attitude and bravado are weapons he uses to keep people at a distance.
Both men know one simple mistake can change a life forever. At first glance, they might seem to be polar opposites. Yet underneath, they’re not that different at all. 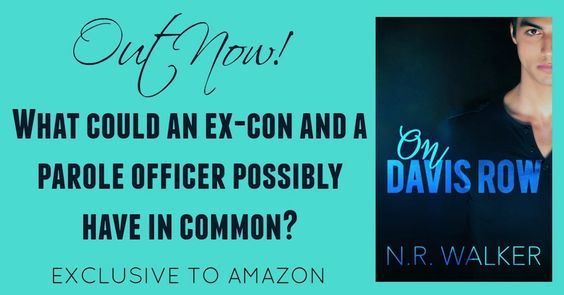 I found CJ around the side of the house at the old shed that was once probably the garage. It was too small for a car now, barely big enough to house his dirt bike and an old lawnmower. He was pretending to be busy with a spanner and a spark plug, and he was very deliberately pretending I wasn’t there.
“Uh, Pops has just gone for a lie-down. He wanted me to tell you. He was coughing pretty bad, so I got him a glass of water.”
The spanner slid off the spark plug and he took a measured breath. “I can look after him.”
“And you do quite well,” I said. “He said you do everything for him.”
CJ knelt beside his bike, knees spread, and refitted the spark plug and worked the ratchet to tighten it in. The muscles in his forearms bunched, his hips flexed a little, and his dirty white shirt rode up so I could see the skin above his low-slung jeans.
God, he was . . . a fucking client who I should not be checking out.
He jumped to his feet and I snapped out of my own head. “Whaddya want?” he asked, brushing past me as he walked back out. He put a cigarette between his lips and I was transfixed. Smoking was a filthy habit, but I’d never wanted to be a cigarette so much in my life.
“Oh, that reminds me,” I said, ignoring his question. “Thanks for the bar recommendation. Had a great time.”
The lighter stopped just shy of his cigarette.
Oh, what’s that? A chink in the armour of CJ Davis?
He lit the cigarette and blew out the smoke. “You went there?”
“Last Sunday night. They have a happy hour at eight.”
He stared at the line of trees to our right and remained utterly silent.
“Did you send me to the only gay bar in Maitland for a laugh? Thinking I’d be horribly offended? Because the back room was just what I needed, if you know what I mean . . .”
His nostrils flared and I bit back a smile. The truth was, I had two drinks, chatted to a few guys, nothing more, and left very much alone. But I sure as hell wasn’t telling him that. He told me to go there as a joke. Maybe he thought I was a joke. Maybe he thought all gay people were. He had no idea I was gay, so maybe he thought sending me there was an insult?
“You got a problem with gay people, CJ?”
His gaze shot to mine, a hard, cold stare. He bit on his cigarette and drew back hard. “Fuck you.”
Maybe there was something underlying in his anger, it was hard to tell. Maybe the nerve I’d hit was a little too raw? “Have you been there?” I asked. “To HQ?”
I didn’t miss the way his eyes flickered back to the house, like the walls or the old man inside might hear. But then he glared at me, took one last drag of his cigarette, and flicked it away. “You done?”
“Yeah, I’m done.” I took two long steps and stopped in front of him. “Next week’s appointment is at the office. You know the drill. If you can’t make it, you need to check in with me first, okay?”
His jaw bulged. “Whatever.”
“You have a drugs and alcohol meeting next Thursday. Why don’t you make it after that, to save you a second trip into town.”
He folded his arms, making his jacket stretch across his shoulders, defining his biceps. It also made his shirt ride up at the front, revealing a dusting of dark hair below his navel.
God, this was so inappropriate. I didn’t know what it was about this guy that sang to me. Maybe it was his stunning rough looks or how he had no idea how good-looking he was. Maybe it was his bad-boy image that I was drawn to. Wouldn’t be the first time.
Even if there was any remote chance he was into guys, and then by some remote chance he was single, nothing could happen between us. We had a professional relationship that could not be violated, in any shape or form. Was that what attracted me to him? Wanting what I simply couldn’t have?
“You all right there?” he asked, catching me checking him out. He had a look of indignation on his face, but there was also a spark of daring in his eyes. The tips of his ears were a red that matched the colour of his lips. He stood with his feet spread and his arms crossed. It was purely defensive, confrontational even, but he wasn’t threatening to me. He was a challenge, a puzzle I wanted to solve. 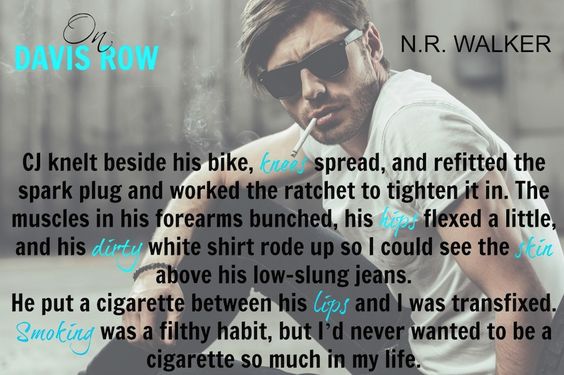 N.R. Walker is an Australian author, who loves her genre of gay romance.
She loves writing and spends far too much time doing it, but wouldn’t have it any other way. She is many things: a mother, a wife, a sister, a writer. She has pretty, pretty boys who live in her head, who don’t let her sleep at night unless she gives them life with words. She likes it when they do dirty, dirty things… but likes it even more when they fall in love. She used to think having people in her head talking to her was weird, until one day she happened across other writers who told her it was normal…She’s been writing ever since…