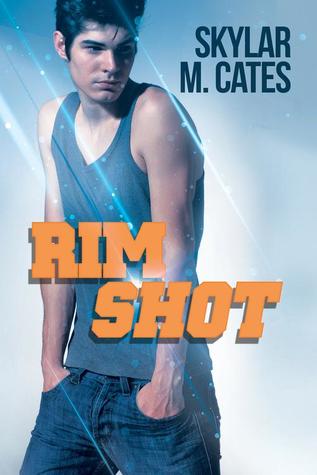 Can college roommates go from friends to lovers?
Kyle: I’m confident that with hard work, my position as point guard can carry me from rural Indiana to the NBA. I also know I’m attracted to guys, but admitting it might disappoint my father, who is all I have in this world. I have big dreams, so I’ll stay in the closet. As long as my life remains scandal-free, I have a shot.
Micah: My large family can’t spare the money to help with my education, but that won’t stop me from studying medicine. I needed to get out of the house I was sharing with my ex before I went insane. Luckily, I heard about a guy looking for a roommate. Living with a straight jock won’t be easy, but it’s a chance I’m willing to take.

The second I saw this book’s blurb I was sold. I am a sucker for sports books and you can throw me a geek and a jock storyline any day.

So I was very excited when I finally got my hands on it.This was my first book by this author so I really had no expectations going in…except for that awesome blurb that is.Unfortunately…I wasn’t blown away…

Kyle is a point guard on the college basketball team. Now I had to look that up because I really don’t know anything about basketball, except for the fact that most of the players are huge and that the ball needs to go through the hoop. 😀

Kyle is also deeply buried in the closet… He has always been attracted to guys, but he has never done anything about it. There are two reasons for this. One is not wanting to disappoint his father, which also leads to point number two, wanting to be the very best basketballer he can be. Coming out to his teammates is not something he is considering.

When Kyle’s roommate Keller, up and leaves because he got his girl pregnant, Keller suggests a new roommate to him…this being Micah.

Micah is studying medicine and he is very out and proud.

He comes from a very large family that doesn’t always have time for him. Nor do they show very much interest in how he is doing. When Micah and his boyfriend break up, Micah is without a place to live. Sure, he can stay in the house they share with other roommates, but his ex, has already moved his new boyfriend in…so he very much wants to leave…So he feels like the luckiest guy on earth when Kyle calls him and tells him he is looking for a new roommate. It doesn’t matter that he will be rooming with a guy he is seriously lusting after.

The guy is straight after all, so no worries …. right?!

Wrong !! Of course, Kyle feels the same way about Micah…so things will be getting pretty awkward for the both of them…Kyle wants to tell Micah that he’s gay… he wants to do all kinds of naughty things with Micah. He doesn’t tell him though. Micah kind of figures things out by himself, and when he catches Kyle in the middle of some naughty business…things are pretty clear.

Both men are very attracted to one another and once they start, they can’t keep their hands off each other. They start falling for each other pretty hard and after some drama, things get even more serious between the two.

Now, all Kyle has to do is open the closet doors and come out…especially to his father.

I would have rated this book 2,5 stars, but the premise of the story was good, so I am rounding it up to three. I just think it lacked in execution. There just wasn’t enough dialogue for me…These guys spend 75 % of the book inside their own heads…it was too much inner monologue for me. Even the sex scenes were like that. So for me, it felt like the story was being “told”.

I wanted…no, I needed more interaction and conversation between the two of them.

Because of this, I didn’t feel a connection with the main characters, and I didn’t feel the real connection between the two of them either.  It just felt a bit awkward to me.To top it all off…the book just ends suddenly,…There is no real ending or epilogue and so many things are left open. I hate when that happens….I need answers. I like closure and unfortunately, I didn’t feel like I got that…It doesn’t say anywhere that this is gonna be a series… but maybe there will be a book 2, I just don’t know.

Now, don’t let my review stop you from reading this book.

Just because I have some weird pet peeves, that doesn’t mean that this is a bad book. It just means that this wasn’t the right book for me…

So make sure to check out some more review. 😉