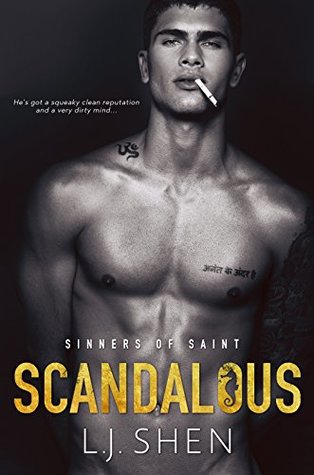 From bestselling author, L.J. Shen, comes a new standalone, contemporary romance. On special sale for only 99 cents for a LIMITED TIME.
“Best book of the year” – Angie’s Dreamy Reads. “Best book I HAVE EVER READ” – Bookalicious Babes Blog.
They call him The Mute for a reason. Hard, cold and calculated, he rarely speaks. When he does, it’s with disdain. When he does, his words aren’t meant for me.
When he does, my stomach flips and my world tilts on its axis.
He is thirty-three. I am eighteen. He’s a single dad and my father’s business partner. I’m just a kid to him and his enemy’s daughter.
He’s emotionally unavailable. And I am…feeling. Feeling things I shouldn’t feel for him.
Trent Rexroth is going to break my heart. The writing isn’t just on the wall, it’s inked on my soul. And yet, I can’t stay away. A scandal is the last thing my family needs. But a scandal is what we’re going to give them. And oh, what beautiful chaos it will be.

I really love this series and after finishing book 2, “Ruckus“, which was awesome, I couldn’t wait to start Trent’s story.

Each book in this series centers around a different couple. I would advise starting with book 1 though since they all play a big part in each other’s lives.

This time it’s Trent’s turn to fall…which he does spectacularly. Trent is the quiet one of the HotHoles…but you know what they say about the silent brooding types….those are the ones you need to look out for.

Trent used to be a big manwhore and his manwhoring, caused him to knock up a stripper. His baby momma didn’t stick around though…leaving both him and his 1 year old daughter Luna when he was away on a trip.

They never had a real relationship, but they did agree to raise Luna together. A lot of this is explained in the previous books, so I really urge everyone to read this series in order. Luna pretty much stopped talking after that.

Now Luna is 4 years old and he hasn’t heard her sweet voice in years. He is trying to be the best parent he can be, but he is at his wit’s end. Luna already sees a therapist and he doesn’t know what else he can do.

Work isn’t going as smoothly either. Ever since the HotHole boys decide to sell 50% of their shares they have been forced to work with Jordan Van Der Zee and for some reason, the man seems to really have it out for Trent. The feeling is quite mutual and both will stop at nothing to force the other one out of the company.

This is where sweet and 18 year old Edie comes in. She is Jordan’s daughter, and Jordan wants her working for the company. Trent figures she is just like every other spoiled brat, doing her daddy’s bidding. He couldn’t have been more wrong though…Edie is fighting some demons of her own.

Trying to keep her family and her life from falling apart.

When these two lock eyes for the first time, they know they are in trouble. Trent feels guilty, for lusting after an 18 year old and Edie thinks Trent is just another entitled megalomaniac…When it becomes clear that Luna really likes Edie, and even responds to her, Trent needs to find a way to keep Edie around. They start up a dangerous game that could both cost them everything.

I really enjoyed this one, though I have to say that book 2 is still my favorite. Maybe that’s because this one was a bit less on the romantic side. That’s not to say they weren’t HOT together because they were flaming.

Edie was really wonderful, but there were times her age really shone through, and I had to remind myself not to get annoyed. Trent was every bit of the asshole here and there was one scene that really pissed me off. He redeemed himself, but it still bothered me.

This book was every bit as scandalous as it promised to be. It had the right amount of angst and it was definitely HOT.

But like I said, I just missed a bit of romance so I can’t give it as many stars as I did book 2. 😉