Check out this fantastic new release, read the Excerpt and Vir’s Review
and grab your copy today!
Don’t forget to enter the Giveaway! 😀 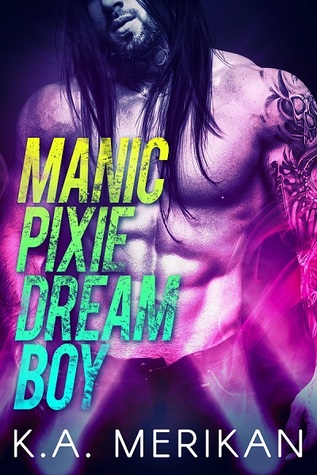 -You can’t hide the cracks under the spotlight-

Dusk. Leader of The Underdogs. Destined for greatness. Lives in the now.
Abe. AKA Lolly. Iridescent. Unicorn.
All Dusk wants out of life is for his band to become world famous. He also wants to have a lot of fun along the way. And to get his rocks off. When he wants something, he goes for it, consequences be damned.
So when he sees a gorgeous pink-haired guy who is the human equivalent of tattooed cotton candy, he can’t help but have a taste. But it’s when Lolly ends up on their tour bus that Dusk knows their meeting was destiny.
Abe is the kind of guy who goes with the flow. He was hitchhiking anyway, so why not spend the week with a hot piece of rocker beefcake, getting smothered by his sexy long hair? And why not play the part of the supportive cutie while he’s at it? It’s not like he’d be sticking around for long anyway.
All plans hit a wall when photos of Abe and Dusk emerge online, suddenly pushing the band into the spotlight. To take advantage of the sudden popularity, the band offers Abe money for staying.
Which means money for being in a fake relationship with Dusk.
Which isn’t even fake.
Or is it? 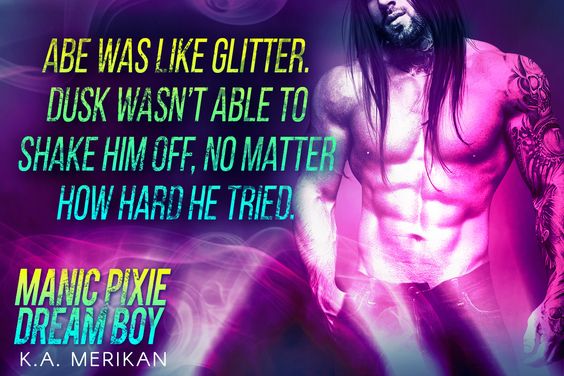 The sun hit him like a red-hot hammer, and he squinted, rushing through the courtyard and into the shadow of the roof. His mouth was already smiling when he saw the logo of an ice cream manufacturer in the window. Since they’d already stopped, he might as well have something sweet to go with the savory. Or, possibly-maybe get peanut butter ice cream and win at breakfast?

The store greeted him with fresh, cool air that he inhaled with pleasure, delving between the shelves to find his prize. He could already see it from afar, next to a few jams, and coffee, and—who the fuck was that?

Dusk stopped breathing and just watched the dreamy, pink-haired creature move along the aisle, headbanging gently to music he was listening to through his mint-colored headphones. There was a lightness to his step, and Dusk followed the guy as if he were a rabbit leading Dusk to Wonderland.

The guy’s hair was styled into two thick, messy boxer braids tied with glittery bands. A pair of rollerblades swung from the guy’s large backpack. With each hypnotizing movement of slim hips clad in well-fitting denim shorts that ended just above the knees, Dusk was beckoned closer to the creature who was so at odds with the coarse surroundings, he must had stepped out of a fairytale and gotten lost in the New Mexican desert. His bare calves were nicely toned and dusted with blond hair, twitching slightly as the angel of a guy danced his way through the aisles.

He only stopped once he approached a newspaper stand and pulled out a music magazine. Leaning slightly against the wall, he finally allowed Dusk a good look on the profile of his boyish yet angular face. Working his way through the pages, he seemed completely immersed in his own little world.

One arm, tattooed in pastel-colored shapes that Dusk could not discern from afar, rose, and the guy pulled on a little white stick that peeked out of his mouth, revealing a shocking pink lollipop that he must have been sucking on all along.

Dusk licked his lips, wishing he could be that lollipop. He checked himself out in a mirror next to a stand with hats, just to make sure he didn’t have anything stuck to his face, and he moved closer to the pastel-hued poisonous butterfly. The guy was cute, colorful, but there was an edge to his look. His neck was inked, and his septum pierced. Oh, how Dusk craved to put his hand against the guy’s Adam’s apple.

He couldn’t recall the last time he was rendered speechless, since he was anything but shy. This guy though, casually sucking on a pink lollipop at this gas station in the middle of nowhere, was making Dusk’s throat dry, his palms sweat, and his dick beg for action.

Lolly blinked and gave a short laugh, staring at something in the magazine. Still gently moving his body to the music coming from his headphones, he rhythmically tapped the lollipop against his lips, only to greedily suck it back in. Every time he smiled, a little black star under his eye moved. At first Dusk had assumed it was painted-on, but as he stared more intently, he recognized it as a tattoo.

That was it. Dusk needed to get himself a piece of that.

He took a few steps closer and reached for a magazine off a shelf above Lolly’s head to get an opportunity to stretch in front of the guy, and when their eyes met, he smiled.

Lolly’s eyes were big and so blue they fit right in with his image. He leaned his head back to look at Dusk more comfortably and pushed the headphones to rest around his neck, revealing flesh plugs of the same minty color. Score.

He moved the lollipop in his mouth with his tongue so that the stick was at the side and wouldn’t prevent him from speaking. “What’s up?”

Lolly pulled on the lollipop so that it slid halfway out of his mouth, only to suck it back in, loudly and without shame. “What flavor do you like?”

“I like fruity. And my manager only allows me one sweet thing a day, so I gotta choose wisely.” It was utter bullshit, but did it matter when their gazes met so intensely neither of them blinked? “Can I try yours to see if I wanna buy it?”

Lolly pulled on the stick, so tantalizingly slow, teasing Dusk with his blue eyes and long lashes, with his perfect tanned skin, with his toned arms that were tattooed into various landmarks and animals. Lolly was not only hot. He wasdesire.

Sink or swim. Dusk would either get a kick in the nuts or a laugh. He leaned down to whisper into Lolly’s ear. Worst case scenario, he could play it down into a joke and continue from there. “You give me something sweet, I give you something salty.”

Dusk’s skin tingled where they almost touched, and he closed his eyes when the soft, frizzy hair brushed against his cheek. Lolly smelled of something sweet, and yet a bit bitter, in a delicious masculine way that made Dusk want to savor him all the more. Cotton candy made of seaweed? No. That made no sense.

Dusk pulled back just enough to look into Lolly’s eyes, and the spot on Dusk’s chest where he’d been touched seemed to tingle as if invisible unicorns galloped along his pecs. How far could he push his luck? The guy wasn’t offended by the dirty joke. Sparks of attraction shone between them as if they’d been glitter bombed, and Dusk found it hard to focus on anything but the pretty lips and blue eyes.

“Intrigued enough to follow me outside and risk that I’m a total psycho serial killer?”

Lolly pulled the candy out of his mouth and slowly moved it along the pink line of his tempting lips, leaving behind a sticky sheen. “Maybe you could taste my lollipop in the restrooms?”

“Fuck yes…” Dusk thought it, but then realized he’d also said it out loud. Oh, who cared? His dick was already filling at the thought of all the things Dusk wanted to do with the sweet lips of this heavenly creature. Was the restroom here actually big enough to fuck in? It better be, because one way or another, he would be scoring soon.

K. A. Merikan is the pen name for Kat and Agnes Merikan, a team of writers, who are taken for sisters with surprising regularity. Kat’s the mean sergeant and survival specialist of the duo, never hesitating to kick Agnes’s ass when she’s slacking off. Her memory works like an easy-access catalogue, which allows her to keep up with both book details and social media. Also works as the emergency GPS. Agnes is the Merikan nitpicker, usually found busy with formatting and research. Her attention tends to be scattered, and despite pushing thirty, she needs to apply makeup to buy alcohol. Self-proclaimed queen of the roads.