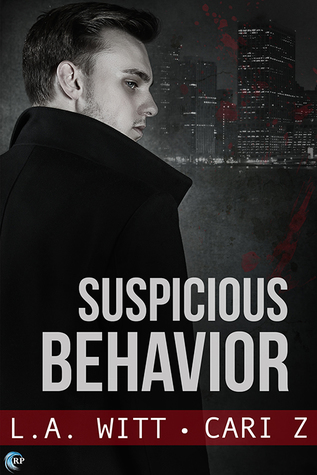 Detective Darren Corliss is hanging by a thread. In between recovering from a near-fatal wound and returning to work at a hostile precinct, he’s struggling to help care for his ailing brother. His partner and boyfriend, Detective Andreas Ruffner, wants to help, but doesn’t know how. And with his own family crises brewing, Andreas is spread almost as thin as Darren.
For cops, though, life takes a backseat to the job. When a stack of unsolved homicides drops into their laps, Andreas and Darren think they’re unrelated cold cases. But when a connection surfaces, they find themselves on the tail of a prolific serial killer who’s about to strike again.
Except they’ve got nothing. No leads. No suspects. Just a pile of circumstantial evidence and a whole lot of hunches. Time is running out to stop the next murder—and to pull themselves back from their breaking points.

No rest for the wicked…

… And our cops Darren Corliss and Andreas Ruffner have their hands more than full this time with juggling between doing their job by solving an extremely intricate case and their personal life which proves to be a tough challenge in its own way.

Boy, could I relate to the exhaustion both men felt. After two weeks of hard work in order to start my vacation, I’m was feeling bone-tired and did not even manage to get much reading done before I went all cross eyed and sleep took over.

I did not have a feeling to fight against windmills because the case takes some twists and turns whenever it seems to be rock-solid.

I did not have to fight my own coworkers who hate my guts due to what happened during the last case and who refuse to provide much needed backup and there is nothing you can do about it.

And finally… I did not have to deal with all the curveballs life throws their way on a personal level which especially pushes Darren -after his injury in the last book still not at the top of his game- nearly to his limits, not to say his breaking point, while a threat that has nothing to do with work is hanging over his head like a black cloud. Andreas is condemned to stand back, feeling helpless, while at the same time confronted with family problems of his own.

So, compared to everything both men had to go through, my last two weeks were a walk in the park.At least their feelings for each other are solid and that is conveyed in every little gesture, word and look they shared. Both men have each other’s back, on and off the job, and that is the one constant in this book.

“Remember back in the beginning when the chief put us together? I fought him tooth and nail. Said I didn’t need a partner, and I sure as shit didn’t want one. And now… I can’t even imagine working without you anymore. I can’t imagine living without you.”

Granted, I would have wished for them to have a little bit more downtime, a little more well-deserved time together to give into their feelings, but their shared moments are absolutely precious and I love both guys more with each book.

Those who look for a steamy romance with both men getting down and dirty at any given opportunity will be disappointed, but those who love a great mystery with a romance on the side will hopefully enjoy this series as much as I do.

The mystery part is downright convincing and that is what I also love about this series. The second case contains once again not your average whodunnit. It is all about hunches and proof and solid police work, which leads to a thrilling climax that had me pacing nervously through my living room because I could not sit still, with my eyes glued to my Kindle. Umm, yeah, only interrupted by me almost tripping over my cat, but… that just as a side note. The serial killer always gives me the creeps and this one was a pretty unusual creepy specimen. A reminder that appearances are often deceiving and it sure made me wonder what must be going on in some people’s mind.

Because I have a feeling that one scene in this book could lead to events that take place in the next one, which makes me a bit anxious, to say the least…