Check out this fantastic book, read the Excerpt and Wendy’s Review…
and grab your copy today!

Don’t forget to enter the Giveaway! 😀 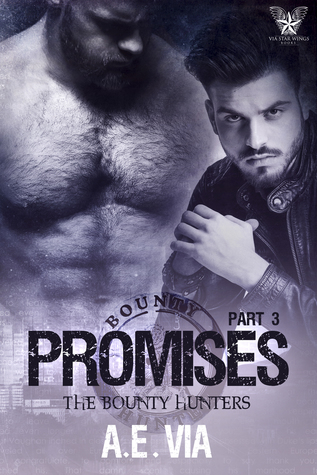 A bounty hunter’s partners to lovers’ story.
The hunt is on… and he’s the prey.

Bradford (Ford) King was sure he had the rest of his life mapped out. Though he was no longer a SEAL Lieutenant, his brother was home safe and he had a job that still allowed him to satisfy his hunger for hunting bad guys. Life was simple, no distractions or complications – at age forty-six – that’s all Ford wanted. What he didn’t want was his work partner, sniper/watchman, Dana, giving him s**t all the time.

Dana Cadby had grown up labeled a roughneck from the wrong side of the tracks. He’d fought, scrounged, and survived despite a father that constantly told him he couldn’t. Dana pulled himself up by his own boot straps and made a name for himself in the marksman community. He’d been Duke’s bounty watchman for five years. It was his job to ensure their safety, watch their backs. At thirty-three, he was trusted, well respected by his peers, his bosses, his friends… so why couldn’t he earn the same respect from his partner?
Dana knew he was bisexual before he graduated high school. He also knew he was attracted to the huge, 6’3”, SEAL from the moment he and his brother came to join their team. It wasn’t easy for him to tamp down his immediate reaction to Ford’s thick muscles, full beard, and dark eyes. Still, Dana exhibited nothing but professionalism towards him, not wanting to make his ‘straight’ partner uncomfortable.

After Dana took back his ex-girlfriend, he’d noticed an intensification in Ford’s bad attitude. One that turned aggressive and downright antagonistic, and Dana was damned if he’d just lay down and take it. He was gonna make that man respect him if it was the last thing he did.
When Duke sends Dana and Ford out to track down their most dangerous bounty yet, they both embrace the fact that they make one hell of a team… but they fight tooth and nail against the powerful intimacy brewing between them.
Beware: When Ford and Dana connect, no fugitive can hide from the hunter and his watchman.

This story is a part of a series but can stand alone. It does not end on a cliffhanger and has a HEA.
Disclaimer: This book is about MM romance, albeit there is a very brief MF scene. He and Dana hadn’t had another opportunity to discuss anything private between them, but the tension hung over their heads like a dreary storm cloud. Both of them figured it was best to leave their personal shit out of the field since it was far too distracting. When they talked, when he looked into Dana’s soft, bedroom brown eyes, everything else around him seemed to fade away. That wasn’t the way a man hunted – by taking his eyes off his targets. But he knew the day was coming, and soon. He’d tell Dana how he felt and hoped he wouldn’t completely embarrass himself.

For now he’d make the best of his one day off. He had a million errands he had to run. Despite the hour, he texted Brian.

Ford: Going to the grocery store and to run errands. You coming?

Brian responded almost immediately. Of course his brother would check his messages, no matter the hour. Sure, bro. I’ll be ready at 9. How’d the surveillance go? Dana isn’t walking on the side of the road again is he?

Ford murmured a few curses under his breath. The guys were never gonna let him forget the day he kicked Dana out of his truck, during another one of their heated arguments, and made him walk all the way from Kirkwoods for almost thirty minutes before Brian got there to pick him up. That wasn’t one of his finer moments. Just another instance of him fighting his wants. He needed to talk to Brian soon about his predicament. He had no one else and his therapist told him it wasn’t good to let everything stay bottled up all the time. Ford trusted his brother completely, so he’d confide in him and seek his advice. Brian didn’t speak out loud, and he had a lot of trauma within his soul, but one thing those fucking Talibans couldn’t fuck with was his brilliance. He’d help Ford get this straightened out.

Stop fighting me. You want me, Ford. Look at me, look at my need for you,” Dana purred, rubbing his talented hands up and down Ford’s hairy chest while he hovered over him. He looked gorgeous. Ford pried his eyes open and feasted on the man’s striking face, he looked like he was glowing, floating above him. Then Ford suddenly felt the weight of Dana’s body on him.

“Unnnh,” Ford moaned loudly. He couldn’t fight it any longer. Yes, he did want him. “Don’t, brat,” Ford whispered painfully.

“Don’t what?” Dana was writhing all over him, his hard body a work of perfection, and Ford didn’t know where to put his hands first. God, he’d been wanting a feel for so long.

Dana was still radiating that beautiful light and Ford wanted to bask in it forever. This was the first time he’d thought of forever. For the first time, the idea of Dana’s face being there when he thought of his future didn’t give him a stomach ache.

Ford bolted upright in bed. The pounding on his front door stopped, then he heard a key turning in the knob. His brother letting himself in. Had to be Brian, because he was the only one with a key to his place. Shit, what time was it? Had he overslept? Thinking of what he was just dreaming about, no wonder his dick was making his underwear stick out like a teepee. He was so hard it hurt. He heard Brian making his way down the short hallway to his bedroom. Ford jumped out of the bed and hurried into the bathroom and closed the door. He hollered to his brother to make a pot of coffee and give him ten minutes. A.E. Via is an author in the beautiful gay romance genre and also founder and owner of Via Star Wings Books. Her writing embodies everything from hopelessly romantic to adventure, to scandalous. Her stories often include intriguing edges and twists that take readers to new, thought-provoking depths.When she’s not clicking away at her laptop, she devotes herself to her family—a husband and four children.

Adrienne has tons of more stories to tell, so be sure to visit her site to learn more! Go to A.E. Via’s official website http://authoraevia.com  for more detailed information on how to contact her, follow her, or a sneak peak on upcoming work, free reads, VSWB submissions, and where she’ll appear next.