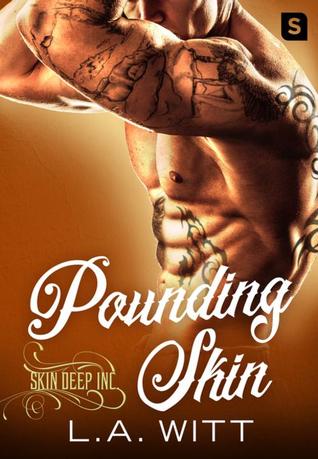 Fighter pilot Jon Russell never sleeps with the same man twice. Known for his lack of shame when it comes to hooking up, Jon has no interest in commitment—even friends with benefits sounds like too much work.
Matt Huffman has slept with lots of women. He’s had loads of girlfriends. So why does the hot as hell pilot getting a tattoo as the result of a lost bet stop his breath? And how come he can’t stop thinking about him, even after he’s gone?

When Jon returns to Skin Deep the second time, he doesn’t want another tattoo. He wants to hook up with the gorgeous artist he spent hours agonizingly close to, and Matt wants to explore some curiosity about men. Fulfill the desire he can’t stop fantasizing over. And he wants to do it with Jon.
As their casual hook up becomes more than just skin deep, both Matt and Jon are faced with questions they don’t want to answer. Matt understands he’s bi—but are these feelings he has typical of hooking up with a man? Or is it only Jon that can make his heart pound? If Jon wanted nothing more than a fling, why does he find himself needing not just Matt’s body, but all of him? And can their relationship withstand the hardships that makes Jon avoid them in the first place?

The Skin Deep, Inc books can be read in any order—come enter a world where gorgeous tattoo artists and hot Navy men find passion, pleasure, and a happily ever after together.

Even if this is book 2 in the Skin Deep Inc. series it could be read as standalone.

In fact, if I had read this book before book one, I probably would have enjoyed more Colin and Daniel’s story. Here we can testify, as the missed epilogue in Back Piece, that they are still happy and totally in love.

Here, in Pounding Skin, a tattoo artist (Matt Huffman) and a USA Navy pilot (Jon Russell) cross paces in Skin Deep Inc. and they are instantly attracted to each other. The problem? One of them is a manwhore allergic to serious relationships and the other, our tattooed hero, doesn’t know even if he is straight, bi or gay. “Yep. Turns out that I am bi. Because effing hell, I want to taste that man”

Matt is hot. I know it’s not the deepest thing to say as a character’s introduction, but he is and I felt really attracted to him. He is a pure contradiction. He has a badass exterior going on (broad, sexy, tattooed and pierced) but he is kind, shy and insecure in the inside since he is “experimenting” new things and he doesn’t know what to expect or how a fuck buddies arrangement works with another man.

Our other MC, Jon, the pilot, the manwhore, the out and proud who doesn’t want a relationship has been a surprise too.
I was gonna start with “he is hot” but I think once in a review is enough. Straightforward and plain with what he wants, Jon is a great and interesting character. He seems to be very confident and clear: he wants to have fun, no strings. And it’s not a pose, he is really happy being like this. Both MCs are deep, complex and attractive enough to support the story themselves even if it’s not necessary because I think this book (and its plot) is better than Back Piece.
I’m not saying book 1 was a bad read because it wasn’t, but to me, it lacked something, a missing piece I couldn’t put my finger on. But this one has found the lost feeling in its predecessor, and LA Witt has done a great job developing plot and characters.

The couple evolution is palpable and progressive. Everything grows naturally between our MCs and that was something that I truly enjoyed.

There are some great things in this book that I feel the need to highlight:

So, would I recommend Pounding Skin? I think is a great read so even if you haven’t enjoyed Back Piece, you could enjoy Jon and Matt’s love story.