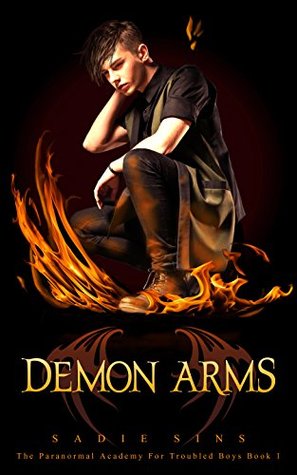 ***This second edition has been lovingly and extensively re-edited in preparation for its sequel, Sorcerer Slayer. Thanks to all the Demon Arms fans and your continuing support! Love, Sadie Sins***

Wylie Doe has screwed himself once again with the help of his freakish demon arms. Sentenced to an academy for out of control paranormal boys, he finds himself surrounded by shifters, sorcerers, and halflings while facing an identity crisis. He has a dragon inside him that’s in love with a sorcerer he’s only just met.
Dorian Black is wealthy, cool, and extraordinarily powerful, but he hides a deadly secret. Drawn to Wylie and his alpha shifter ways, he can’t stop his dangerous attraction or the literal sparks that fly between them. Wylie’s everything Dorian’s been dreaming of but isn’t allowed to have.
When gangsters call Wylie out to face his past, he’s ready to take responsibility for his mistakes. Will Dorian finally make a stand for the boy he’s fallen for? Or will Wylie find out the hard way if his dragon scales can stop a downpour of bullets?

When I read the blurb of this book, I was mildly intrigued. When I actually read the book I was stunned.

It was so much better than I expected, although I should have known because my friend Susan loved it. Susan…you were absolutely right. 😉

This book was sweet, funny, sexy and really interesting.

Wylie has been dealing with his “demon arms” ever since he experienced a traumatic event when he was 8. He knows he is some sort of shifter but he has no clue what he really is.Being shipped from foster home to foster home,  he hasn’t had any contact with other shifters and he sure as hell isn’t gonna goes look one up and ask questions.

When Wylie is caught up in the middle of burglary and shit goes extremely wrong, he finally learns what kind of shifter he really is…

After being caught by the police, he is sent to an Academy for shifters, sorcerers and other creatures for 5 years. The Academy exists to help its students deal with their powers in the right way.This is where Wylie meets Dorian…

The most powerful and dangerous sorcerer of the Academy.

One look at Dorian and his dragon decide that Dorian is his.

There is one small issue though…Dorian isn’t always in control of his very powerful magic. Being touched often leads to him sending off sparks and in the past even incinerating someone.

These two try to stay away from each other, because of the danger involved, but it’s really no use because the attraction between them is too strong.

I didn’t expect this book to be as steamy as it was. Wylie was quite the dirty talker and he even had some exhibitionism in him…it was yummy. 😀

“You’re so fucking hot like this, beautiful. So sexy. So desperate for more. Anyone seeing you right now would know you were meant to be fucked.”

Very pleasantly surprised by this one.This book ends with a HFN and the author states at the end of the book that there will be more soon about Wylie, Dorian and all the other awesome characters that live at the academy.

I am definitely reading the second book!!