Redemption (The Protectors #8) by Sloane Kennedy 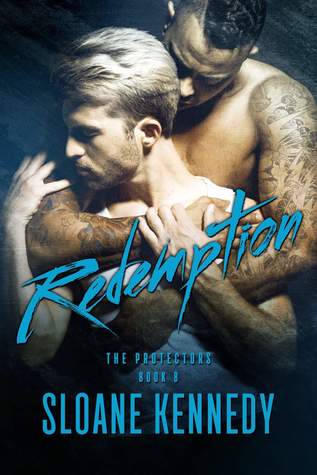 My job is to save lives. But what if the one that needs saving is the one I was sent to take?

At 33 years old, Phoenix Jones once had a stellar military career ahead of him. But when tragedy struck his family, he walked away from the path he’d chosen to be there for the one who needed him most. Except fate is a bitch and when she once again takes Phoenix’s future in the cruelest of ways, he must find a new path.

When a former army buddy introduces him to Ronan Grisham, the leader of an underground vigilante group, Phoenix knows he’s found a new family and nothing and no one is going to take that from him again. So when Ronan asks him to shadow a young man who participated in a brutal crime against Ronan’s husband, Seth, when he was a child and appears to be targeting him again, Phoenix doesn’t even hesitate for a second.
Even knowing what he must do if the young man proves to have gone back to his old ways.
Because family is everything…

I can’t come back from what I did. I’m not sure I even want to…

An ugly childhood left Levi Deming with little to do but dream of a day when he’d be free of his tormenters so he could carve out a simple life for himself, preferably somewhere far away from the family who never let him forget he was less than human. But one terrible choice at the tender age of 16 changed everything…

Wracked with guilt for the role he played during a home invasion gone horribly wrong, a now 24-year-old Levi is trying to piece together a life where he can maybe do a little bit of good, even knowing it won’t make up for the lives he helped take and it definitely won’t give back the future he stole from the young man whose agonized screams still haunt him night after night. If it were only about him, he’d walk into the nearest police station and happily tell them to lock him up and throw away the key.
But it isn’t just about him anymore…

I expected to find a hardened criminal. What I found was something else entirely…

With Ronan’s orders to terminate young Levi if he so much as even jaywalks, Phoenix expects an easy job with one clear outcome. But when a violent encounter forces Phoenix to interact with Levi, he quickly realizes the case might not be as black and white as he thought. Instead of finding a criminal with no conscience, Phoenix discovers a young man battling impossible odds and near crippling guilt.

When his feelings of disgust and anger begin to fade and turn into something else, the would-be hitman is forced to make a terrible decision between the family he needs and the young man more intent on seeking judgement than redemption. Father O sobered and then turned his attention on Levi. I watched his fingers curl around Levi’s chin. “Put some ice on these,” he said as he carefully fingered the bruised skin. “You know where to find me.”
Another nod from Levi. I expected it was yet another one of their silent conversations. The priest got up and left the room. Levi shifted and pushed the blankets off his body before swinging his legs over the side of the bed.
“You shouldn’t lie to a priest,” he murmured.
His observation was a surprise, but I didn’t bother to deny it. It had been a pretty lame argument.
“Why were you really in that alley?” he asked.
“That’s not really what you want to ask me, is it?” I countered.
An uncomfortable sensation floated through my chest as I watched Levi bend his upper body over his legs and let his clasped hands dangle just above his knees. His demeanor was much like what it had been in the alley after the rough blowjob.
“If you tell me who he is, I can help you,” I said, shocking even myself. But every time I tried to remind myself that this guy deserved everything he got, I saw him spitting out that cum, his eyes empty, his body broken. It was like he’d accepted that all he’d ever be was some guy who belonged on all fours in a dirty alley surrounded by garbage, waiting for the next man to come along and use his body.
As much as I detested him for what he’d done to Seth and his family, I’d seen enough in the last hour to know he hadn’t walked away unscathed. But I also still had more questions than answers. And the bottom line was that I didn’t believe in making people suffer for their crimes. I’d joined Ronan’s team to make sure justice got served, not to inflict the same torment on my marks that they’d inflicted upon others. Maybe it was a fine line that separated me from the monsters I hunted, but it was there just the same and I knew what side of it I wanted…no, needed to be on.
Levi hung there dejectedly for a moment before saying, “You should go, Phoenix. I really appreciate what you did for me in the alley, but I don’t think it’s a good idea for you to be here.”
When he got up to leave, I grabbed his wrist to keep him next to me. He shuddered and I heard him let out a wisp of air, but he didn’t try to pull free of me. On the one hand, I was glad he wasn’t fighting me, but on the other, I kind of wished he would.
“Why not?” I asked. “Why shouldn’t I be here?”
Levi finally lifted his head and turned to meet my gaze. My heart hurt for him as I saw the tears pooling there. “Because I’d be too tempted to take you up on your offer. What you saw out in that alley…I deserved it…I earned it,” he whispered. His tears fell and he pulled free of my hold so he could dash them away. He let out a wet-sounding laugh. “Father O keeps telling me God’s watching over me…that he loves me no matter what and he’ll forgive me for all of my sins.” Levi shook his head. “I don’t have the heart to tell him God gave up on me a long time ago.”
I let him go when he stood and left the room.
Because no matter what, I wasn’t going to tell the man I’d been sent to kill that his life was worth fighting for.

Even if the tiniest part of me was beginning to wonder if maybe it was. ALL ON KINDLE UNLIMITED

Although Sloane Kennedy always dreamed of being a writer as a teenager, she didn’t take the plunge until March of 2015 when she released her first novel as an independent author. Since then, she has released more than a dozen books including the Amazon best-selling “Barretti Security” series, “Finding” series and “Protectors” series. While she initially began writing M/F romance, she found her true passion writing gay romance and all four of her most recent releases reached the #1 spot on Amazon’s Gay Romance bestseller list and Freeing Zane, her final book in the Barretti Security series, made it to Amazon’s overall bestseller list. Sloane was born in Germany and grew up in Virginia and Wisconsin. Although she currently lives in Wisconsin, the place where she has always felt most at home is Seattle and many of her books take place in the Emerald city. Although she is unmarried, a menagerie of 2 dogs and 3 cats keeps her busy enough and 3 young nieces take care of the rest of her free time. Sloane loves being able to share her passion for romance with readers and she is truly humbled by all the support she’s received from fans and fellow authors alike.

To my new FB friends, feel free to check out my fan group, Sloane’s Secret Sinners. We do lots of giveaways and it’s the only place you can sign up for a chance to get an ARC.
YOU MUST BE FRIENDS WITH ME OR FOLLOWING ME TO JOIN.