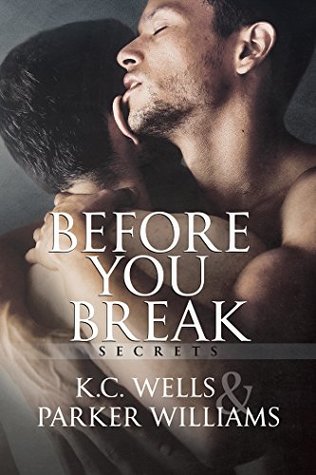 Six years ago Ellis walked into his first briefing as the newest member of London’s Specialist Firearms unit. He was partnered with Wayne and they became fast friends. When Wayne begins to notice changes—Ellis’s erratic temper, the effects of sleep deprivation—he knows he has to act before Ellis reaches his breaking point. He invites Ellis to the opening of the new BDSM club, Secrets, where Wayne has a membership. His purpose? He wants Ellis to glimpse the lifestyle before Wayne approaches him with a proposition. He wants to take Ellis in hand, to control his life because he wants his friend back, and he figures this is the only way to do it.

There are a few issues, however. Ellis is straight. Stubborn. And sexy. Wayne knows he has to put his own feelings aside to be what Ellis needs. What surprises the hell out of him is finding out what Ellis actually requires.

Before You Break (Secrets #1)

This book is a spin-off of the Collars & Cuffs series, which I am ashamed to say…I have not read yet …hangs head in shame.

Wayne is gay…and also a Dom. Ellis has only been with women.

Lately, Ellis hasn’t been doing so well, due to several circumstant stances (read a very messed up family) and he seems to be on the verge of some kind of breakdown. Wayne, who secretly has a thing for his friend, is very worried, but he thinks he has a solution for Ellis’ state of mind.

Also, this is a book and not real life…so…

As it turns out, Ellis is indeed a sub, but accepting this fact…now that’s a much different story. Ellis has always been raised a certain way. The man is supposed to be the strong one…the one taking care of everything, and submitting…won’t that make him weak?

Also, he is supposed to be straight….right?

To say that Ellis’ family was messed up is putting it very lightly. His parents especially were horrible.

Now the question is…will Ellis submit to Wayne, and will Wayne finally be able to show his friend how much he really cares for him.