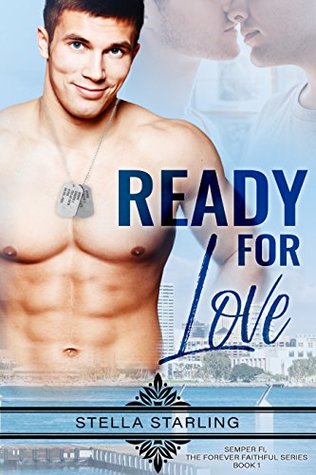 Jake Hansen has been crushing on Gabe Byrne for half his life, but since Gabe is a straight, self-proclaimed commitment-phobe who moved away years ago to join the Marines, that crush is strictly a fantasy-best-enjoyed-in-private. And even when Gabe starts to flirt with him like crazy, Jake still knows better than to think it means anything.

Because falling in love with your straight bestie? Not just a cliche, but a guaranteed recipe for disaster….right?

Growing up, Gabe never saw “Little Jakey” as anything more than the kid who always liked to tag along after him and his brothers, but somehow, being friends with Jake has become the best part of his day. And after a seven-month deployment? Seeing Jake is the one thing he’s looking forward to the most.

He just didn’t expect that hanging out in person again would be so confusing… or keep blurring the lines about just how straight he is… or keep making him want things that he never thought he would.

I absolutely adored this book. I actually smiled from beginning to end.

I haven’t read the other series by this author, but after reading this one, I will definitely be checking it out.  This book just made me all kinds of happy and for that alone it deserves 5 stars. 😀

Gabe and Jake have known each other since they were young.

Now that they both grown up, they are still good friends. Jake is an out and proud flight-attendant. Gabe is a straight marine, with commitment issues, who has been deployed for the last 7 months. The two of them have been keeping in contact through text messages.

After returning home from deployment, he surprises his “Jakey”, by picking him up at the airport. Now, these two have apparently always been flirting back and forth for shits and giggles, but for Jake….his flirtations come pretty close to the truth. He has been harboring a major crush on his straight friend for a long long time.

Gabe is pretty much clueless.

That is until one night on the town, changes everything for Gabe. He is starting to get aware that his feelings for Jack have changed…into something much more than friendship.

He realizes, that he is lusting after his best friend.

Now, what to do. Well, that’s quite simple…Why not turn the friendship into a friendship with benefits. Jake has some doubt because he knows that Gabe is not offering him a real relationship. He knows exactly how Gabe feels about those…but how can he say no, when what Gabe is offering him, is one of his “dirty dreams” come true. He will just have to try and protect his heart.

These two couldn’t have been more opposite, which made their interactions/banter pretty funny.

This story is sweet, romantic, funny and sexy as hell. What more does one need…