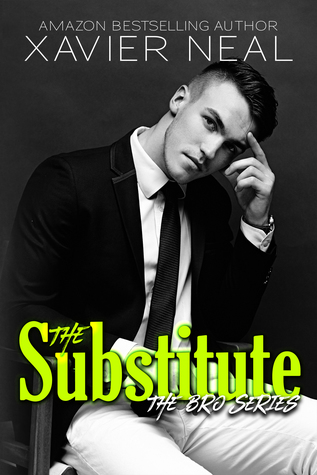 Ainsley
I’ve spent my entire life ashamed of who I am.
Who my mother is. What she does.
Being forced to attend a private school where people endlessly whisper about it is only bearable because I know exactly what’s in my future.
I know exactly where I’m going.
I know exactly what to do to get there.
Or at least I thought I did.
One class with him and suddenly my entire world was missing one very important piece.
Being with Nate isn’t just about sex.
It’s about loving life in a way I never imagined.
The situation isn’t ideal, but I’ll do whatever it takes to be with him.

The Substitute (The Bro Series, #1) by Xavier Neal

Since I loved the Senses series, I said I definitely have to try this one out.The book was good, hot as hell, as this author knows how to write, but something was missing. For me, at least. It was a little overall, overhead. Ainsley is a young girl who is struggling to survive until she gets her ticket to college, full scholarship. She loves movies and all about them and she is studying in a well-known high school, one of the elites one were all the richest teenagers study. Her mother is an escort, and all the money she gains she’s spending them all in her, designers close, perfumes, spas and of course, drugs.

Nothing on her daughter and in the house.

Ainsley has a part-time job, and with what she gains, survives and pays the bills of the house. All the kids from her high school know what her mother does for a living, and so she doesn’t have many friends. Although Ainsley is eighteen years old, and Nate 30, she is the adult, the mature one in this relationship. Nate…was and still is a mystery to me. I didn’t connect with him. Like I said were many moments when I thought he was eighteen, and Ainsley 30. I didn’t like how weak he was in front of Ainsley, weak in the sense he couldn’t resist her. Don’t get me wrong, I love that, what woman doesn’t love the way a man can’t resist her, I wanted more struggling for him, more resisting. But I loved how dominant he was when he put his arms on Ainsley.

It was possessive, rough, just the way I like it. 😀 And I also loved his relationship with his ”bros”.

So…if you’re looking for a funny, hot and easy reading, this is the one for you.