Angel’s Feather is the first book in the 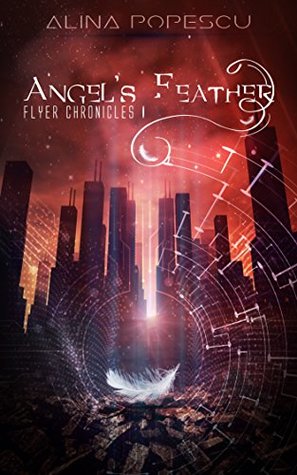 How far would you go for the one you love? How much of yourself would you sacrifice?

Trapped on a decaying Earth and cut off from the rest of the Universe, humans are no longer allowed to leave their planet. Break this one law and you die: a penalty enforced by flyers, aliens who look like angels of long-lost religions. Michael, the flyers’ leader, is the Punisher who carries out every public execution.

Adam, a young human with near-perfect memory, is committed to rebuilding Earth and a true believer in the flyers’ dominion. While Adam’s support for flyers isn’t a secret, his deep love for Michael is. Not even Michael knows, for his kind never take human lovers, and to Adam, they are too far above him to reach.

In his broken and unwelcoming world, Adam’s love can only lead to pain, loss, and disaster. Yet there is no force in the huge expanse of stars and galaxies that can stop Adam from following Michael to the end of existence. Not even Adam’s own beliefs.

“FLYERS!” THE FRIGHTENED voice pierced the air and shot straight to my heart, gripping and squeezing it tightly. My breath hitched and I dropped the tool I was holding.

What we used to know as angels became Earth’s wardens. Flyers, as they call themselves, are the universe’s enforcers. They make sure we stay in our jail and that we obey the rules. We can build anything, do anything, destroy anything, as long as it is not an attempt to build new spaceships or weapons that could damage the spherical force field prison that keeps us locked in here.

“Damn it all to hell.” The wrench was lodged between the rusty parts of the old tractor I was trying to repair. Our village’s hope for better crops, it was, and I’d just gotten something stuck in it. Served me right for thinking all it took to become a mechanic was an eidetic memory. I had no other choice though. Most engineers and mechanics were either hiding, always on the run, or dead. Why they all insisted on building spaceships and trying to leave Earth was beyond me. We had other pressing needs, exploring the universe should have been our last concern.

“Hurry up, kid. It’s the Punisher.” My uncle gripped my shoulder and tried to make me move. He needn’t worry, I’d never miss a chance to see Michael.

Michael, the archangel of long lost tales of divinity, is the leader of the squad of flyers that guards us. They have set up camp on Saturn and use their all-seeing eyes to monitor our every move. Everyone hates the flyers, more so Michael. Most don’t even remember his name, he’s just referred to as the Punisher. Whenever someone does something against the rules enforced upon us, Michael and his angel guards come down to Earth and exert punishment. It’s always very public, broadcast to the furthest corners still inhabited. He comes, he crushes, he leaves. Each time, people add to their hate for him.

Writer, traveler, and coffee addict, Alina Popescu has been in love with books all her life. She started writing when she was ten and she has always been drawn to sci-fi, fantasy, and the supernatural realm. Born and raised in Romania, she finds her inspiration in books of all genres, in movies, and the occasional manga comic book. She is a proud geek who needs her fast Internet and gadgets more than she needs air.

Keep up with Alina Popescu’s books and get rewards by signing up for her newsletter.