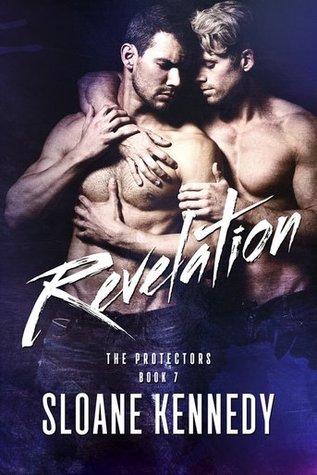 Revelation (The Protectors #7) by Sloane Kennedy

This is the 7th book in the “Protectors” series and I was extremely excited when I found out that Sloane Kennedy was releasing this book a few days sooner. Over the last year, this author has become one of my favorite mm writers and her books are an absolute auto-buy for me.

Even though this book can be read as a stand-alone, I would like to encourage everyone to read all her books in the right order. Sloane Kennedy has published a few series, which she keeps adding to, and some characters cross over from one series to the next. Reading these books is so much more enjoyable when you actually know all the side-characters. By now I actually feel part of this huge family she has created.

At the end of my review, I will post a list of all the books, in the right reading order.

If you haven’t started this series yet, I suggest you start now. 😀 Cain is one of the men, working for the underground organization, Ronan is leading.

Cain’s new job is to search out Ethan Rhodes. Ethan works at the same hospital as Ronan and the man just seems to have upped and left, leaving his wrecked and blood-stained apartment. Ronan thinks the man is on the run and he wants to know exactly what is going on. So this is where Cain comes in, he wasn’t prepared for what he would find though…

Ethan has been living in hell for the last 4 years.

His story was horrible and though he was quite broken….he wasn’t completely defeated. Part of the reason he wasn’t, was because of Lucy. She is a new character we were introduced to. I loved this girl and I loved Ethan for wanting to protect her…even when he was down and broken.

Seeing Ethan so broken rises every one of Cain’s protective instincts.

“I’d wanted to wash away that proof so that I wouldn’t ache inside for what had happened to him.”

Which confuses even him, because he doesn’t understand why he is feeling this way. Cain has lived through a horrible past of his own and ever since he doesn’t like to be touched and he doesn’t do feelings very well. But there is something different about Ethan and the way he makes him feel.

In helping Ethan fight his demons, he realizes that Ethan is also helping him fight his.It was very nice seeing these two broken souls come together and start healing each other.

“We were just two people finding in each other what we couldn’t find in ourselves.”

I would have loved to give this book 5 stars but there were some things that bothered me, so I couldn’t. With everything that happened to Ethan, I found it bit hard to believe that he opened up to Cain the way he did. And I don’t just mean mentally, I mean physically. This brings me to the triggers.

For those of you who are sensitive to triggers, be warned that this book deals with several, which I will put under a ⇒spoiler physical abuse, sexual abuse, mental abuse and murder/suicide.⇐

Still, I loved reading this book, as I have loved all of the books in this series…

…and I can’t wait to read the next one, which will be about Phoenix. I have to admit that I myself am extra curious about Vincent, who’s another character we got to meet in this book. I hope we will get his story soon too !!

If you want to read according to the correct timeline.

If you are not an m/f reader you can skip those books without any problem because each book is written as a stand-alone.

3 thoughts on “~Review~Revelation by Sloane Kennedy~”