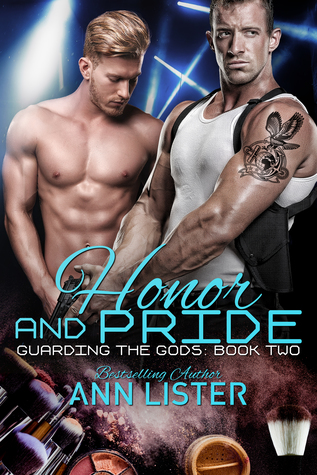 Honor and Pride (Guarding the Gods #2) by Ann Lister

So naturally, when I found out that there would be a spin-off of that series, I wanted to read all those books too.

This is the second book in the “Guarding the Gods” series and though I enjoyed it, I was a bit confused. I figured with the name of the series, we would also get some celebrities….or at least some roadies from “Black Ice” or “Ivory Tower”. No such luck though. Not even a glimpse of the “Rock Gods” from the previous books, though they are mentioned once or twice.

I was a bit dissapointed with this, though that doesn’t mean the book wasn’t good. It was just not what I expected.

This book is about Fizzbo, PI and security guard of rock stars… …and Kensey, who once did hair and make-up for the “Rock Gods”. Fizzbo has had his eye on Kensey ever since they met on the Europian Tour, but after the fire in Germany (book 1), he hasn’t seen or heard from Kensey. Thankfully his luck changes, when Kensey shows up for the last (mandatory) group therapy session, for those who have been in the fire.

Fizzbo is not about to let this opportunity go by and starts chatting Kensey up and asking him out for a date. Kendey is interested in Fizzbo, but he is also very wary. His past has let him believe that he is only good for a “one and done”, and he isn’t interested in those anymore. But Fizzbo doesn’t take “no” for an answer and Kensey is curious to see what could be. They agree to take things slow, but it doesn’t take very long before the two of them are burning the sheets together.

I always know that I am guaranteed some amazing steam when reading an Ann Lister book.

Fizzbo was such a dirty talker, which Kensey (and me) loved.

“I’m going to make a full meal of feasting on your sweet ass. I will lick and I will fuck that hole with my tongue until you’re screaming so loud the neighbors call the police to do a well-check on us”

But things are not as good as they might seem. Kensey is struggeling with his past and his selfworth. He is also keeping some big secrets and Fizzbo is not an idiot. He knows Kensey is hiding things…

Of course, secrets always have a way of coming out….so they do.

I was a bit shocked, to be honest. I was also a bit angry with Kensey. Not because he lied, but because of what he did to begin with. Fizzbo was way more understanding than I would have been. I understand pressure in high school and I can even understand it in college, but he did this and he kept doing it because he didn’t want to face any consequences.

Now, he didn’t deserve what happened to him in the end, but I don’t think he should have gotten off scot-free either.

That being said…Kensey wasn’t a bad character, I did like the guy. The two of them were perfect together, though at times a bit on the cheesy side…

I enjoyed this one, but I have, to be honest here… 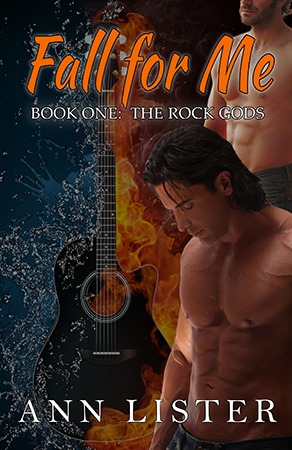 Fall For Me (The Rock Gods #1) by Ann Lister

So I corrected my mistake when Christelle reminded me of this book.

Having read most books in this series, I already knew Dagger and Ryan. So far I have actually liked the books about the Black Ice members better than the “Ivory Tower” ones. My favorite books being 6 and 7.

Dagger is the lead singer of the very famous rock band “Ivory Tower”. He has been with men and women, but he classifies himself as gay because he likes being with men more. He is also hiding in the closet because being out might ruin his career.

Ryan is an entertainment journalist, who is about to interview Dagger for a magazine. Ryan has always been straight (except for a kiss he shared in his past) and he is still best friends with his ex-girlfriend.

When these two meet, Dagger is immediately attracted to Ryan. Ryan…he is intrigued by Dagger, at least that’s what he thinks he’s feeling…

After Ryan catches Dagger in a compromising situation, Dagger contacts him, to talk things out. He has to be sure that Ryan won’t share his secret with the rest of the world. The two start talking on the phone and from there on out, they keep on talking to each other. They become closer and soon Ryan is not so sure about his feelings anymore…

…because how can he be attracted to Dagger since he is not gay.

Of course, Ryan can’t keep denying his feelings and he finally gives in to Dagger.

Which was very HOT by the way.

Now, this is where I started to get pissed off a bit.

I have always liked Dagger in all the other books and come to think of it…this may have been the reason I skipped this book in the first place, after reading some reviews.

Beware…there are some spoilers and ranting ahead !!!

When their private business becomes a public business, Dagger loses his shit !! He blames Ryan and goes on a yelling spree. Now, this I could handle. Him actually hurting Ryan….not so much. What a freaking douchebag !!! I hated his guts for what he did and I was really disappointed by the fact, that Ryan didn’t even seem angry.

Sure he apologized…and I am sure he meant it, but still….what an ass !!

Still, I enjoyed this story, but…

I am taking half a star off for Dagger being a douchebag and Ryan being a push-over !!

However, this is one of my favorite rock star series and for me, each book just got better and better…The only thing I really missed in this book were the other band members…I don’t understand why they weren’t present in this book. They don’t even get mentioned. I guess it might have to do with this being the first book of the series…