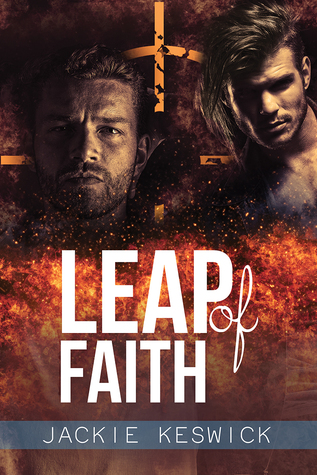 ~Blurb~
Close friends and partners at FireWorks Security, Joel Weston and Kieran Ross know each other’s strengths and weaknesses. They have each other’s backs, make a formidable team, and carefully ignore their volatile chemistry.When Kieran struggles with the aftermath of an assignment gone wrong, Joel is there to help.
When Joel is caught in an explosion, Kieran jumps into a burning marina to rescue the man who means so much to him. But they never discuss what’s closest to their hearts, not prepared to risk their friendship for the mere possibility of something more.
Faced with bombs, assassins and old ghosts, Joel and Kieran must find out why they’re targets, who is after them and—most of all—how each would feel if he lost the other. Can they continue as best friends, or is it time to take a leap of faith?

Leap of Faith by Jackie Keswick

Bless my heart! This story did not only keep the main characters in suspense…

When I was offered the ARC for Leap of Faith I was all shining eyes and toothy grin, just because of the blurb alone. This is so my kind of book: friends to lovers romance wrapped in a mystery/suspense plot with a whole load of action. For the most part, the story kept its promise, so much so that my eyes were glued to my Kindle and I read it in one go.

Joel Weston and Kieran Ross are partners at FireWorks Security.

They are also best friends since the day Kieran began to work for the organization of Joel’s father which is specializing in kidnappings, extortion and hostage situations.

They rely on each other.

They keep an eye on each other.

They complement each other in every possible way.

Two sides of the same coin.

Both men just clicked from the moment they met and teamed up to such an extent that neither one dares to admit to himself -much less to the other- that there are deeper feelings in play. They refuse to pursue their chemistry from fear of risking their friendship or their teamwork.

“Joel had no idea how to phrase what he meant to say. “We’re good as a team. We’re good as friends. We both worked hard to get this far. Going any further could ruin everything.”

When a hostage situation hits too close to home and subsequently someone tries to kill them at every turn, both men have to deal with their feelings for each other eventually, but also with ghosts of the past, both to overcome their fear and to get to the bottom of things.

I instantly connected with the characters, albeit a bit more with Kieran. That did not surprise me at all because it is a fact that I have a penchant for tortured heroes and Kieran matched this paradigm to a T with his PTSD and his compassion which leads to letting the fate of every victim of a crime get to him. Compared to Kieran, Joel remained a bit pale for me, but since this is the first in a new series, I’m pretty sure that will change with the books to come. What I loved about him is his dedication to keep Kieran safe at all costs and to make Kieran feel safe no matter what. He has a somewhat bossy attitude while doing his job, but likes to let it all go when it comes to Kieran dominating him in bed. Normally, I am the one who complains about not enough depth in a novella, not enough time to form a basis for a story, but this is not the case here. Like I said, this is the beginning of a series and the author manages to introduce the setting right down to the last detail, be it the location or the structure and tasks of the organization.

On the one hand, it did not feel like a short story. There is so much happening in this book and the roughly 12o pages are filled with adrenaline-level-boosting action scenes, which made me breathless while ensconcing myself in my comfy armchair.  Some people might complain that the romance took a bit of a backseat, but you are dealing with an ultimate slow-burn lover here, so the gradual progress of the relationship just sealed the deal for me to enjoy it. I felt the connection between Joel and Kieren everytime they were together and this kind of relationship needs development, which obviously cannot be established within a few pages.

On the other hand, I still wish the story would have been longer.

My main niggle about it is that there was sometimes too much telling and not enough showing, be it regarding sex scenes – the first real sex scene was off-page, goddammit! – or conversations I would have liked to read about and not just being told afterward that they took place. The sex scenes that were there made up for the lack of those non-explicit, though. Kieran’s kinks are mirrors and –holy moly– that was really hot… The story ends on -um, no… no worries, not on a cliffhanger, at least not regarding the relationship, which can be considered as an HFN – but on a not solved case which will keep the main characters -and I’m pretty sure the reader as well- busy in the next installment.

This was the first book for me from this author, but definitely not the last.

I like her writing and she was able to make me curious about both, the further course of events in this story and also about her other works.