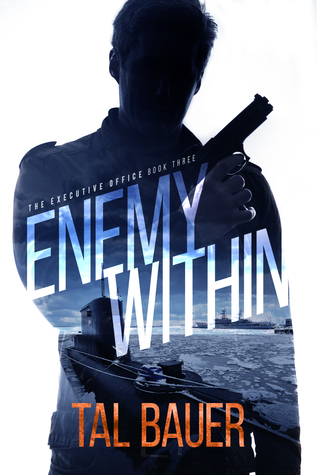 The White House, infiltrated.
The president, running for his life.
A traitorous general, intent on burning the world to the ground.

When everything falls apart, who do you trust?

President Jack Spiers fled Washington DC on the heels of a devastating attack on CIA headquarters, masterminded by one of America’s own, former General Porter Madigan. While the world believes Jack was killed in the bombing, he embarks on a wild infiltration mission, smuggling himself into occupied Russia to rescue the love of his life: former Secret Service Agent and First Gentleman Ethan Reichenbach.

Reunited, Jack, Ethan, and deposed Russian president Sergey Puchkov, along with President Elizabeth Wall—the only person left in Washington DC who Jack trusts—must work together. They piece together a desperate plan, hunting Madigan to the ends of the earth and the bitter frigidity of the Arctic, where Madigan’s world-shattering doomsday plan comes together.

Outnumbered, outmaneuvered, and outgunned, Jack, Ethan, Sergey, and the rest of the team struggle to put a stop to Madigan and his army. In the desolate extremes of the Arctic, their resolve, their strength, and even their love is tested, pushed to the absolute limits as choices must be made: choices that pit the fate of the world against the love in their hearts, and the loves of their life.

As the world crumbles around them, Jack and Ethan find themselves waging a war on two fronts—against an enemy they can see, and another, hiding within their ranks.

Who can be trusted when the enemy is within you?

Enemy Within (The Executive Office #3)

Umm, no worries, this gif is not a spoiler!

Enemy Within picks up right where Enemy of my Enemy ended and Jack, Ethan, Sergey, Sasha, Adam and Faisal and all the others try to stop former General Madigan and his henchmen from pursuing his idea of “a new dawn rising”, from creating a new world order by destroying everything known to mankind at any sacrifice, which would not only affect America, but the world in its entirety. To make things worse, each step to achieve their goal is endangered by Madigan’s followers who already infiltrated them on the inside. With just a few men against an army, outmanned and outgunned, the odds are against them and their time is running out.

By scattering our heroes all over the northern hemisphere, Tal Bauer sends us on one hell of a ride…that will make you clutch at any straw for a moment to breathe…

I will keep this review as spoiler-free as possible so I won’t go into detail about the storyline.

I just promise you that you will be sitting most of the time on the edge of your seat. Well, umm, at least that is what I did. I could not sit still and I fidgeting the whole time. I am even pretty sure that I discovered the one or other gray hair when I looked in the mirror today, that what is left of tearing it out I mean. There are lots of jaw-dropping situations where I wondered if one of the characters I came to love so much during all the books would make it and…I am more than happy that Ethan kept Jack in good shape, beforehand…

…so he was able to keep up with the other guys.

Of course, there are also scenes that made me laugh out loud due to a certain adorkable Secret Service Agent and others that made me cry -sob even- when it was questionable if Jack and Ethan, Sergey and Sasha or Adam and Faisal would see the love of their lives, respectively each other again.

But most of all, each and every swoon-worthy moment was the one thing that conjured a goofy grin on my face and made each situation when my heart leaped into my throat that much more bearable.These moments kept the balance in this book. These moments helped the characters…

…to have some time for themselves, some time to recover…

Obviously, suspending your disbelief seems to be once again mandatory, but for one thing, the story takes place in the near future and who knows what will be feasible by then and for another thing,…

…thinking about the current political situation, this…

Our leaders must be accessible. They must be trustworthy. If our leadership is not accessible, honest, and accountable, we run the risk of our nation sliding into a degradation of democracy and a despairing illusion of freedom.

… leaves some doubts about the story being that far-fetched.

Tal Bauer did once again a great job with his research, be it regarding locations, religion or events that actually took place at some point and which he included perfectly into the story. If you are interested in more details, make sure to read the author’s notes at the end of the book.

The circle story is complete, everything is wrapped up, but the author left the door open to continue with the series at some point down the line. Well, it is pretty rare for me that I love each and every character in a book -at least the good guys-, and yes, okay, Adam and Faisal are still my favorites, but this being the case…