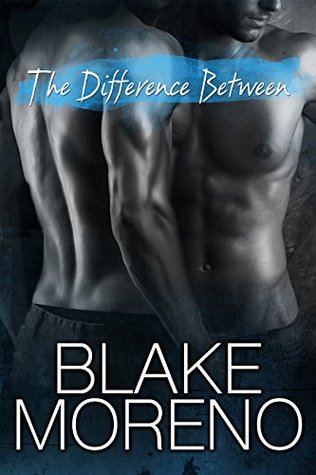 The Difference Between By Blake Moreno

Admittedly, it is pretty rare that I read dark books and, if so, I definitely have to be in the right mood.

Nonetheless, I would not consider myself being particularly squeamish, but nothing in the world could have prepared me for the chapters two and three of this book. If they are not dark and disturbing, I don’t know what is. You will learn in detail what a mentally ill person is able to do to another human being and though this is fiction, it felt realistic and brutal and excruciating. There is a trigger warning at the beginning of the book and you should take it seriously, as in really seriously.

You might ask yourself now, why the hell did she not give up on this book.

Well, authors who are eclectic, who are not set on a special type of story, who can write pretty much anything from funny to emotional to dark, and moreover do this in an authentic, believable fashion are pretty rare. Authors who make me enjoy topics I’m normally not pretty fond of are even rarer. When I learned that this is a book by Leta Blake – written under a pen name – of course, I could not resist giving it a shot. Leave it to her  -or in this case Blake Moreno – to turn such a gut-wrenching story with almost unbearable occurrences into an overall enjoyable read for me.

Wade leads a happy life, in a stable loving relationship with Russ…

… When he is being kidnapped, raped and tortured by his ex-friend-with-benefits, Owen.

In the first three chapters of this book, we get a pretty graphical presentation of the things Owen does to Wade and surviving this horrible experience seems to become nearly impossible. I have to admit that I powered a bit through these scenes. On the one hand, I had to read through my fingers sometimes and on the other hand, I could not put it down.

After having faced all sorts of humiliation over several weeks, Wade is finally being rescued…

…and what starts now is an emotional journey of taking control over his own life again, of being in charge of his feelings. Especially his sex life, something he more than enjoyed being rough and kinky before, is understandably a sensitive subject now. His devotion and determination to make it work made my heart clench. You cannot imagine how much I felt for him.

Obviously, the task at hand is far from being easy and there are more than just a few regresses when random things like words, events and even things that belonged to the daily routine so far, trigger flashbacks, but I loved Wade so much for not giving up. With the help of a special therapy and with the support of his lover Russ, Wade slowly but surely gets a grip on “normalcy” again, or rather as normal as his life can be from now on.

The same goes for Russ, though. Let’s face it, Wade might wear the physical scars, additional to the emotional ones, but the ordeal of a loved one also takes a toll on the one left behind, and Russ is no exception on that matter. Feelings of guilt and pain almost wreck him, but he does everything in his power to be supportive and protective and to make Wade feel safe again. That is all that matters to him. At the end, his intentness on how far he will go is put to the test and once again there were some scenes that made me swallow if not even a tad uncomfortable, but to a certain degree, I could comprehend Wade’s train of thoughts in order to feel whole again. What I also loved about this book, aside from the strong characters…

…and the sensitive fashion the author deals with the recovery of Wade, was the fact that there is no additional drama due to Wade and Russ’s relationship. One feeling that does not waver during the whole book is love which goes along with a lot of trusts. On both sides. Both men never question their love for each other and it is love and inner strength that keeps both of them sane. I recommend this book with caution, it is definitely not for the faint of heart.

You can skip the most challenging parts, but be aware of the fact that there are still some references to the happenings during Wade’s torment, although not that graphic as in said chapters.

But if you like to read an intense story filled with hope, love, and fortitude,

you should give this book a try.