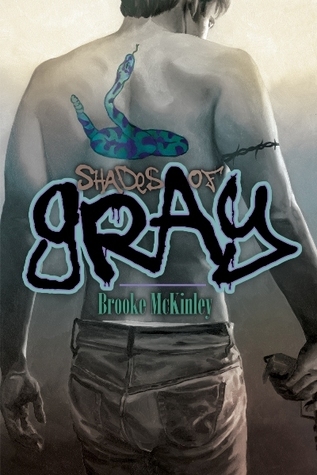 Shades of Gray by Brooke McKinley

WHY THE HELL DID I WAIT SO LONG TO READ THIS???

At first glance, this seems to be a typical crime story. FBI Agent blackmails a criminal into testifying against his boss, they fall in love, the boss gets wind of the deal, both are on the run and were miraculously saved. End of story.

Nooo, not this time. Obviously, Shades of Gray has a crime plot, but first and foremost it is a romance. A beautifully written love story between two men on different sides of the law. You feel the chemistry between them virtually sizzling, but it is not just pure blind lust. From their first time together there is a tenderness, that grabbed my heart.

Miller and Danny are far from perfect, and yet for me, they are.

Miller Sutton, a somewhat disillusioned and job weary FBI Agent, who lived all his live in denial about his sexuality, about who he really is.

Danny Butler, a drug runner whose bad choice got him to be delinquent when he was a teen, but who came to terms with it along the way, until some events -some decisions- made him question his choice.

Both men have to realize in a painful way that not everything is black and white. Not their situation and not the other person.

I never thought I would cry over a crime story someday… There were scenes in this book that were hard to take. I had tears streaming down my face while at the same time, I felt pure white-hot rage. And the apparent hopelessness of their situation honest-to-goodness made my chest constrict.

It makes me sad that the author apparently has chosen not to write any other books, but I can not be happier that I met Miller and Danny. I loved them both so hard, well, maybe Danny a little bit more. 😉 I know, I know… I’m late to the party and I could not add anything else that has not already been said in other reviews so I will leave it at that.

In case you are as late to the party as me, read this book, you won’t regret it! This goes straight onto my favorites shelf!!!

11 thoughts on “~Review~ Shades of Gray by Brooke McKinley”