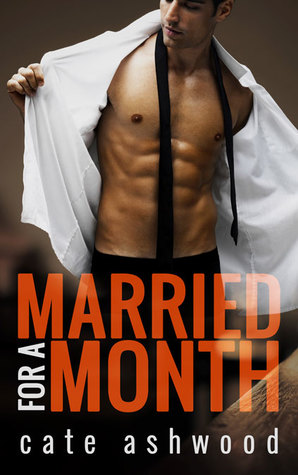 Married for a Month by Cate Ashwood

I was a bit worried when I read the blurb.  Fake marriages are not really my thing, but once I started reading, I found myself completely sucked into this sweet “best friends to lovers” story.

It also helps that these men, don’t actually marry. Chase and Alec have been best friends for a very long time. Chase is known as being quite the player among his friends. Chase isn’t ready to settle down into some relationship. He thinks, that once people settle down or get married, everything will go to shit and life will be boring and sex will be non-excistent.

So he sticks to hook-ups.

That is until his friends bet him that he couldn’t stay married for a month, even if he wanted to. According to them, marriage is hard work, and Chase is not cut out for this. Chase, of course, can’t resist proving them wrong. And who would be a better candidate in this “fake” marriage, than his best friend Alec.

So he “fake” proposes right then and there.

Their friends have a little wedding ceremony for them.

The rules are: they have to live together for a month, sleep in the same bed, eat together and go on a date once a week. Sounds easy enough….what could possibly go wrong ?? Both men are lusting for one another, and why not just give in right…it’s just sex…

I really enjoyed this story. It was sweet, hot, funny at times and there wasn’t any angst….

Just two best friends falling in love with each other.

You would think, that with me being such an angst junkie, I would be bored, but I wasn’t…not at all. It was exactly what I needed right now. I will

I will definitely look into more books by this author.  🙂