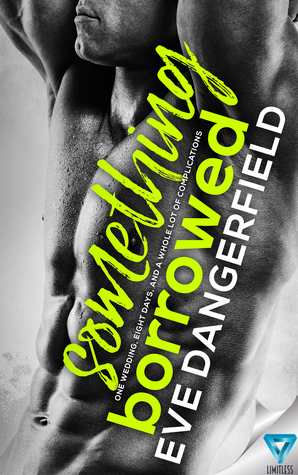 Something Borrowed by Eve Dangerfield

I can’t believe what I just read. I am blown away. I’m in impasse here. I like it, but I didn’t. After reading Taunt, I am certainly reading all the books that Ms. Eve will write. They are insane in a good way. So if you haven’t read anything from her, you MUST read Taunt or Something Borrowed.

To be honest at first, at the beginning of the book I was a little bored. Then…through the reading, I was shocked in a good way and in a bad way too. I’ve never read something like this before. And I don’t like it. It’s not my thing. It’s not my kink.  But who am I to judge what other people like, or do, or what their kink is. I like the man to be the Dom, especially in the bedroom. But this…with the girl being the Dom…it was nice and good, but not my thing. So…let’s get down to the story.

Elle is a beautiful blonde, crazy bitch in all the right spots, with anger management problems. She hate’s weddings and her best friend, Tory just invited her to her wedding. 8 days in Bali. But that is not the only problem that Elle has. She has to sing to her best friends wedding, and still, this is not the only problem that she has. She has to make a duet with Ben’s (Tory’s future husband) best friend, Jackson. And Elle HATES Jackson. Like really HATES Jackson. Jackson was a slut. A manwhore. A jerk, an asshole. He made mistakes, especially with Elle. But he is ready to reconquer Elle. He is ready to prove Elle that he is a changed man. He knows that it will be very hard. But he loves her and he does everything for Elle to see the new and changed Jackson. And so he does everything in his power, even torturing himself to prove that.

What will happen it’s up to you to find out by reading the book. WoW …This book was insane.OMG, I laugh so hard and so many times that my tummy hurt.

I loved Elle for so many things …her don’t give a f@@k attitude, her feistiness and angered, for her honesty, for those moments when she show her submissive side, for her craziness, for her relationship with her best friend Tory, for her calmness with Mel in the club and when Mel found out who Jackson prefers ( I would’ve lost my shit long time ago when it comes to Mel, and beat the shit out of her ), and for so many other things. She’s a great heroine. In the end, I loved the book, although it’s not my kink.

It was a great crazy as fuck story, funny as hell.

Thank you, Eve Dangerfield, for this opportunity. You write some crazy and funny stories.

ARC kindly provided to me by the author in exchange for an honest review.